After that first meeting at Max Clifford’s office, and my subsequent hasty escape, I’d been booked to go back for a ‘follow-up’ meeting with him two days later, which I did. He and I had also shared a few texts in between. And please, for the record, let me point out here and now that these meetings had NOTHING to do with my affair with Gordon Ramsay, nor exposing it, nor asking for his help to do so in any way, as at that time (April 2008) it had not even hit the press yet, and since we were still in full swing of it I was still protecting Gordon and our secret liaisons. As I said in Part 1, these meetings with Max were in the initial hope of engaging his PR services for a controversial Canadian dating site I was quasi-spokesperson for. So I was a potential client to him. And since the dating site was sleazy, and Max was turning out to be sleazy, I was beginning to think it could be a match made in heaven. 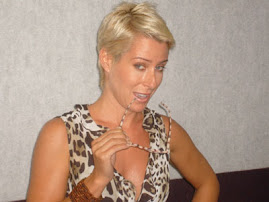 As I sat down in the leather chair again, I realised this second meeting was going to be more about business. Albeit somewhat monkey business, but business nevertheless. Max told me he'd looked at my book, and liked it. He said he would like to put me in touch with someone called John Blake who was a publisher. He'd also read the reality show concept I’d written - based on infidelity and getting people to STOP cheating - and said he’d liked it a lot. “I’ll get this in front of Simon (Cowell) if you want me to, and if he likes it he may help you too,” he stated confidently, repeatedly twitching his neck and shoulder - an annoying and distracting trademark habit of his - as he delivered that nugget of information to me. I couldn’t believe what I was hearing. He went on to flatter me (it gets you everywhere right?) by telling me that I had a great message and I was bringing something new and different to the market with my work. He said I had some great ideas, I was smart and articulate, I was a good-looking girl, and that I just needed a bit of luck. Apparently (and I quote) “I just needed someone to turn that key in the lock.” I guessed that was PR-Guru-speak for I ‘just needed a break.’ And he was spot on, I did. Finally someone who understood me. I’d been trying to get a break for over 4 years, so at that time, an invitation to meet Simon Cowell was like a round-trip ticket to Mecca!

He went on to tell me that Simon would be flying into London mid-May, and how he’d try to introduce me to him (I literally sat there and immediately thought how the hell would I afford another train ticket up to London so quickly after this one!!). He went on to tell me a few things that Simon liked sexually. Shocking yes, but remember nothing surprised me from Max after the wife photo. Max didn't do confidentiality. He boasted that the reason Simon paid him so much was because he kept certain stories on him out of the papers. He went on to twitch and tell me that while I was personally way too old for Simon (thanks for that Max) he did like young girls, and that if I knew any young olive-skinned girls (fact!) and could gather them up and introduce them to him, it might influence Simon to help me if we met, and convince him to read my TV show concept. (FYI - I don’t know what he meant by young, I am guessing early twenties.)

By now, I was really starting to see a pattern here about how these men operated. You scratch my back (and other parts) and I’ll scratch yours. You stroke my ego (and other parts) and I’ll stroke yours. I could see I was going to have to go along with it all if I had any hope of making it in this business. I was naïve and desperate in many ways, but I wasn’t a kid and I wasn’t stupid. I had lived and worked in LA and knew all about the casting couches. Even so, as I sat there trying to digest all this information, I actually berated myself for not knowing a harem of young olive-skinned girls that might help me get to Mr.Key-Lock-Turner himself, even racking my brain how I might find some by mid of May! How crazy is that! But in hindsight that's how toxic this business can be, and how desperate people can be to get a break into it. I'm not proud of any of this, and I began to wonder how - in the space of just a few days - my business meetings with Mr. Max Clifford could have possibly turned into a pimping fest of epic proportions.

We chatted on a few other ideas, and he called in his PR Manager Lucy Heather to join us and take some follow-up notes, Oh, and to make sure the dating site received MCA's proposal contract asap (yes, you’d forgotten about that with all the pimping going on eh. So had I!). After she exited, and as our meeting was coming to a close, Max reminded me that he wanted me to go to the toilets outside the main office door when I left, and to wait for him in there. “But Max," I said nervously, "What if any of the girls out in the office see me going in there and you coming in?” “Don’t worry it’s foolproof," he replied, "It will just look like you're turning left to get into the lift down to the lobby.” He was right. I guessed he had given these instructions before.

As I took the walk of shame towards the location of the 'Max Clifford Associates' toilets, the thing that would shock - and sicken - me the most, was when I found out Max Clifford's casting couch would turn out to be his daughter’s specially adapted disabled toilet cubicle. That is something I can’t ever forget. But what could I do? I was there now, I was in the toilet, and that lock was about to be turned. Literally!

To be continued....
Part 3 – the final part – of The Max Clifford Chronicles will be posted soon.....
By the way, if anyone wonders how I remember so much of this, not only is it etched into my brain, and a story shared with many people since, but, I always kept a diary, and these Chronicles are a big part of my diary that year.
Posted by Act Now at 16:59