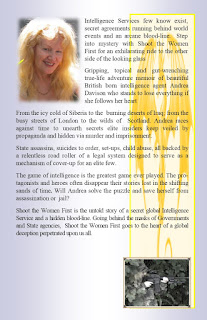 Gripping, topical and gut-wrenching true-life adventure memoir of British born intelligence agent Andrea Davison. Intelligence Services few know exist, secret agreements running behind world events and an arcane blood-line. Step into mystery with Shoot the Women First for an exhilarating ride to the other side of the looking glass.
From the icy cold of Siberia to the burning deserts of Iraq; from the busy streets of London to the wilds of Scotland. Andrea races against time to unearth secrets elite insiders keep veiled by propaganda and hidden via murder and imprisonment. State assassins, suicides to order, set-ups, child abuse, all backed by a relentless road roller of a legal system designed to serve as a mechanism of cover-up for an elite few.
The game of intelligence is the greatest game ever played. The protagonists and heroes often disappear their stories lost in the shifting sands of time. Will Andrea solve the puzzle and save herself from assassination or jail?
Shoot the Women First is the untold story of a secret global Intelligence Service and a hidden blood-line. Going behind the masks of Governments and State agencies, Shoot the Women First goes to the heart of a global deception perpetrated upon us all.

https://www.amazon.com/Andrea-Davison/e/B0771YGJX9/ref=dp_byline_cont_ebooks_1
Posted by Act Now at 15:20 No comments: