In November 1997 the South London Press reported the finding of a sex dungeon complete with manacles , chains , bedding and a sleazy red light in Lambeth High-Security Police Head Quarters in South London. The civilian staff who leaked the story were suspended and Officers from Scotland Yard’s Criminal Investigation Bureau were called in.

Detective Chief Inspector Clive Driscoll ( who later went on to convict the Stephen Lawrence killers ) was put on the case and he soon started following up leads. However when his leads led him to politicians, including at least one who was a Lambeth Labour Councillor and is now an MP, he was taken off the case and put on disciplinary charges.
.
However before his removal DCI Clive Driscoll had discovered that all 25 of Lambeth’s Childrens’ Homes had been run by a large paedophile network for over 20 years.
There were around 50 Children who had entered Lambeth Childrens’ Homes and never been seen again by their families.
The leader of Lambeth Council at the time was Ted Knight (Labour) who was a close friend of Margaret Hodge (Labour) who was leader of nearby Islington Council. It is believed that Children were “traded” between Lambeth and Islington Councils. 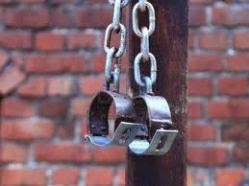 Manacles similar to those found in Lambeth Police Station

When Councillor Anna Tapsell, who had campaigned against the sexual abuse of Children in Lambeth Care Homes and Police Stations for over twenty years, complained about Driscoll’s removal she was visited and “warned off” by a senior Police Officer.

The Metropolitan Police set up a five year investigation, and as is usual in Britain three low level paedophiles got a couple of years in jail for minor sex offences. The major players all got clean away to continue their “activities“. 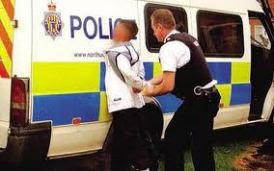 Police detain a youth – was he sexually abused or used for Child pornography at the Station?

The Police claimed there weren’t any links between the Lambeth and Islington paedophile rings, but I found some glaringly obvious ones within five minutes. Abraham Jacobs was convicted in 1986 for his part in a paedophile ring that specialised in picking up run away Children in Piccadily Circus to provide for the sexual abuse by BBC Executives and Labour Party Politicians.


Abraham Jacobs had worked at both Islington and Lambeth Care Homes and was known to Margaret Hodge, Jack Straw and Ted Knight.

Another link is Michael John Carroll. He was one of the paedophile “fall guys” from the Lambeth Care Home Scandal – this is a quaint British tradition where small time paedophiles get convicted of minor sex offences and all enquiries are then closed in to the bigger picture.

Even though Carroll had been a relatively low paid Council Employee, on his release from prison he bought The Grade 2 Listed Hand Hotel on Church Street in Chirk ( just outside Wrexham ) for £725,000 cash. The Crest Hotel in Wrexham is usually linked to the Wrexham Child sex abuse scandal, but The Hand Hotel was also conveniently close to Wrexham  in North Wales.   North Wales childrens Homes were also used as a ready supply of innocent children for the child sex trade and regularly ferried to London for VIP parties in venues like Dolphin Square

Another link is Jason Hoyte a convicted paedophile and Police informer. He had been warned off by Police from hanging round Islington Care Homes and had somehow avoided a CRB check and obtained a job as a Youth Worker with Lambeth Council. He was sacked in 2006 after being caught grooming Children for BBC Executives on a Council run Youth training scheme, he tried (and failed) to sue Lambeth Council for unfair dismissal. He was jailed in 2009 for 9 years for sex attacks on, and grooming of, young Children.

On January 31st 2011 a Police Constable from Lambeth Police Station, Jordan Janssen, was sentenced to a total of 12 months in prison at Southwark Crown Court, by Judge Debra Taylor, for making and distributing Child pornography. This was a result of an outside Police Force catching Janssen emailing Child pornography to a man in Scotland. It is not known how much of this Child pornography was made at Lambeth Police Headquarters. Janssen has refused to reveal the identity of other Police Officers involved.