Word is out that Leon Brittan has been questioned by the police  about  his paedophilia and Elm Guest House.   But is it just a rumour or  will there be any justice for  raped abused and murdered children?

Will former Home Secretary  Brittan finally remember the Dossiers given to him  by Geoffrey Dickens MP and  will the Derby Police finally be asked why they stole copied pages from the Dickens dossier from Andrea Davison?

Will their finally be an investigation into the snuff video trade in British children?

UPDATE:  Thank you to Charles Firth, investigator and campaigner, for confirmation that Leon Brittan is being questioned by the Police. 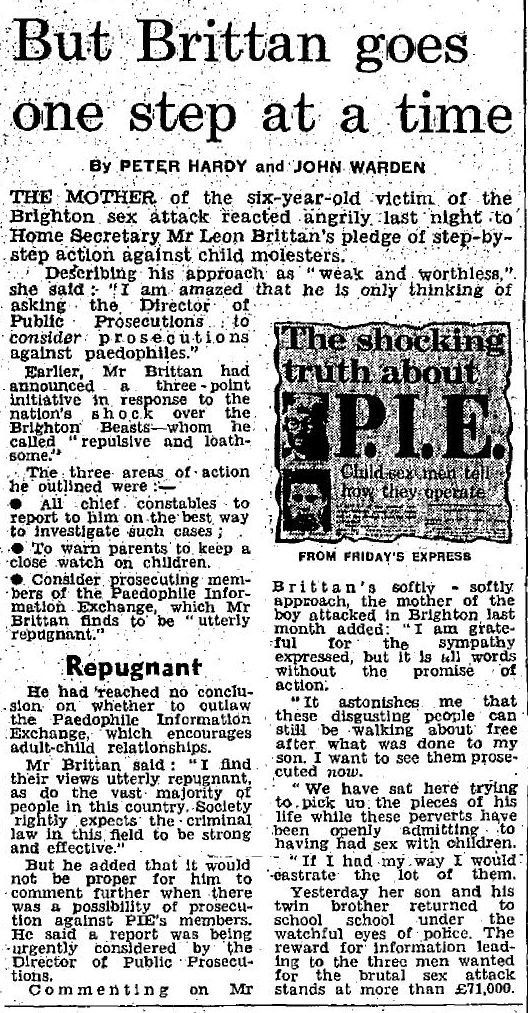 
Two children who disappeared in south-west London may be linked to Elm Guest House.


Elm Guest is the boy brothel allegedly used by top people linked to MI5, the police and Margaret Thatcher's cabinet.
The Metropolitan Police say that the boys' disappearances are not being re-investigated.

Martin Allen, 15, was last seen by a friend at King's Cross Tube station as he made his way home from school on November 5, 1979. Martin's family lived in a cottage in the grounds of the Australian High Commission in Hyde Park Gate, Kensington.

"A member of the public saw an apprehensive boy fitting his description with a man on a Tube train travelling towards Earl's Court."
The man was heard to say to the boy: 'Don't try to run.'
http://www.dailymail.
Earl's Court is popular with gay Australians.

"Vishal, from Putney, south-west London, vanished while shopping with his nanny and sister on the day of the marriage of Lady Diana and Prince Charles.
"The skull and several rib bones of eight-year-old Vishal Mehrotra were discovered in 1982 by pigeon shooters in remote marshland at Durford Abbey Farm, at Rogate, close to the Hampshire-West Sussex border."
Detective Superintendent Dave Gayler, of Sussex Police said: "We would look at similarities with the murders of Jason Swift and Daniel Handley" (who were abducted in London, abused and then dumped in rural areas)
news.bbc.co.uk

"Scores of children might have been protected from kidnap, rape and indecent assault" if the police had properly invetigated "the alleged establishment paedophile ring" operating at Elm Guest House in the 1980s.

"At least three men listed in documents as visitors to Elm Guest House.... were later convicted of multiple sex offences against children, The Independent can disclose." 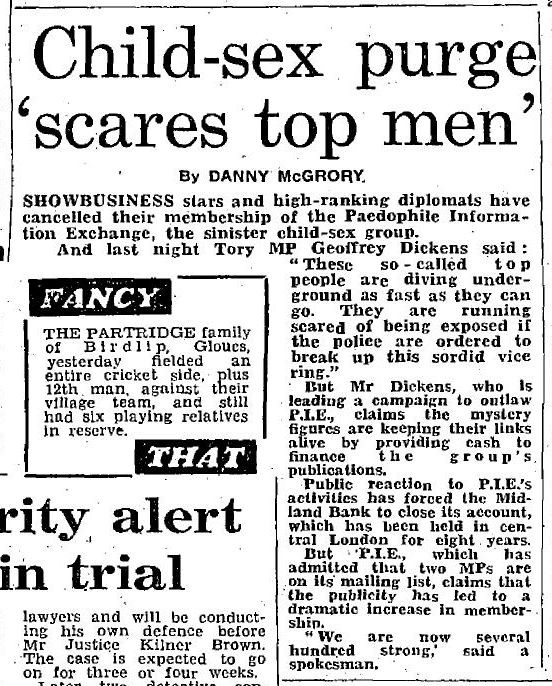 In 1983, Sir Leon Brittan (right) a senior minister in Margaret Thatcher's Cabinet was handed Geoffrey Dickens's dossier on top people's child abuse rings. Asked by The Independent what the dossier alleged and what action, he took, Sir Leon replied by email: "I have no recollection of these matters. Sorry!"

Elm Guest House "became a place where men had sex with young prostitutes and later, allegedly, boys and girls from the now-closed Grafton Close children's home in nearby Hounslow.
"Police raided the property in 1982 and charged its owner, German-born Carole Kasir, with keeping an immoral house but did not arrest any guests."

Childcare professionals claim that there was an establishment cover-up.

Anthony Milsom, a paedophile from Hull, who is alleged to have stayed at Elm Guest House, later moved to Newtown, Powys, where he was convicted of a string of sex offences.
He was jailed indefinitely in 2011, but six months later appeal court judges reduced his sentence to three-and-a-half years.
Another alleged visitor was Colin Peters, a Foreign Office barrister, who was jailed in 1989 for being part of a child abuse ring "used by highly placed civil servants and well-known public officials".

The most infamous alleged visitor to Elm Guest House was Warwick Spinks.

Warwick Spinks, convicted in 1995 of very violent child sex offences, committed in Hastings in the UK.

"One boy had simply been shot through the head, Terry said: he had been causing trouble and had been executed in front of several paedophiles.

"Another, he believed, had been thrown into one of the canals.

"But the one about whom he spoke the most was a boy who had been tortured and killed in the most painful fashion in the course of producing a pornographic video."

Amsterdam - linked to the 'Nazi-run' Bilderberg.

"Williams boasted of the day in south Wales when he had seen a 10-year-old boy on his bike, grabbed him, raped him, and, when he cried, strangled him.

"From Boys Clubs 21, he organised the importing of boys from Cardiff and London, inflicting intense violence on any who defied him.

"Spinks had been running a mail order pornography business from Brighton, before he moved to Amsterdam"

Spinks trafficking boys, as young as 10, from London and eastern Europe.

Reportedly, the Dutch told the UK police that they lacked sufficient evidence to prosecute.

And reportedly sections of the British police said they lacked the money to investigate what was happening in Europe.

Spinks reportedly made snuff movies - films in which children were murdered.

In the UK, it has been alleged that dangerous child abusers held key positions in certain local government authorities, such as Islington in London.

It has been alleged that these dangerous child abusers had links to child abuse on the island of Jersey and beyond.

The island of Jersey had a children's home that was run as a boy brothel for the elite.

In The Mail on Sunday, 3 August 2008, Eileen Fairweather, wrote that Birmingham council illegally sent children into care on Jersey, according to a report by John Hemming, Liberal Democrat Member of Parliament for Birmingham Yardley.