ELM GUEST HOUSE ARRESTS MADE OF SMALL FRY STAFF BUT NO POLITICIAN, NO JUDGE, NO POLICE OFFICERS ARRESTED ?


The  Met Police investigation into the Elm Guest House paedophile brothel took a dramatic turn today. The first two people suspected of being involved in the scandal were arrested at dawn today in simultaneous police raids in Hastings and Norfolk.

The  first arrest at a flat in St Leonards came as Exaro reporters were outside the flat and witnessed the eight police from the paedophile unit arrive at 7.15 am. There is a full report and a picture of the arrested man being taken away by police on the exaro website (http://bit.ly/X2U3RK).

The first man to be arrested is John Stingemore, the former deputy manager of Grafton Close children’s home. Now 65 and frail he was taken to a local police station for further questioning.


Grafton Close children’s’ home, closed since the 1990s, is on the borders of Richmond and Hounslow. One central allegation in the story is that  it supplied young boys to Elm Guest House,in Barnes  a place strongly recommended on the Conservative Group for Homosexual Equality and offering discounts to people belonging to the Spartacus club, then an organisation  for men seeking sexual relations with young boys. Central to the allegations is the guest house for VIPs including politicians, government ministers and business people.

This is the first action by the Met police since 1982 when they raided the guest house and made 23 arrests. All the people were then released. Harry Kasir, the owner of the guest house, was later charged and convicted of running a gay brothel. 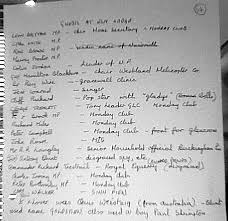 Two men aged 66 and 70, were arrested in raids at their homes in Norfolk and East Sussex this morning.
They are understood to be former staff connected to the Grafton Close children’s home which was run by Richmond Council in South West London more than 30-years ago.
The arrests were made by officers from Operation Fernbridge, an investigation that was set up by the Metropolitan Police to look into claims that a paedophile ring involving a number of high profile individuals was operating in the Richmond area in the early 1980s.
The investigation was launched following information passed to the police by the Labour MP Tom Watson.
The allegations are understood to involve claims that children at the Grafton Close children’s home were abused both there and at a guesthouse in Barnes, South West London.


The Elm Guest House was allegedly run as a male brothel in the early 1980s and police have been investigating claims that boys from the children’s home were taken there where they were used to have sex with adult men.
It has been alleged that among those who frequented the guesthouse were a number of high profile figures including senior politicians and personalities from the entertainment industry.
Cyril Smith, the late Liberal MP for Rochdale, who was recently exposed as a serial child abuser, has already been named as a regular guest at the property.
Speaking in Parliament in October last year, Mr Watson told MPs that a file of evidence used to convict Peter Righton of importing child pornography in 1992 contained "clear intelligence" of a sex abuse gang.
Mr Watson alleged that a member of the group had bragged about links with a senior aide to a former prime minister.
Commander Peter Spindler, head of the MPS Specialist Crime Investigations, said: “This is a complex multi agency investigation supported by the NSPCC, CROP and Richmond Social Services involving non recent allegations of sexual assault against children.
“It is vital that anyone who has been affected by or has information about activity in the early 1980s at the Elm Guest House, or the Grafton Close care home, in Barnes speaks to the NSPCC on their Helpline on 0808 800 5000, or their local police.'
A spokesman for Richmond Council, which ran the care home, said: "Richmond Council considers the safeguarding of all children and young people as an utmost priority and we take any allegations of abuse very seriously.
"As such we are offering our full support and cooperation to the police during their investigation. As the investigation is ongoing, it would be inappropriate to comment further at this time." source http://www.telegraph.co.uk/news/uknews/crime/9852237/Two-arrested-in-Elm-House-paedophile-ring-investigation.html


Responding to a report by the Sunday People that the 66-year-old man arrested in Norfolk is a Catholic priest, Father Mark Hackeson from the Diocese of East Anglia said: "The church diocese takes safeguarding of children very seriously and so we will be co-operating fully in any way with the police investigation."
Posted by Act Now at 08:34