Leon Brittan  first named in the North Wales Child Abuse Scandal has come up again in the Elm Guest House Scandal.  He was well known to be a paedophile interested in boys it is alleged.   But was protected by the Establishment and the Police and still has not been arrested or questioned about the allegations.

Decades later the victims are waiting for justice from  Cameron's Government will it happen?

I can confirm that documents seized under warrant by members of the Operation Fairbank police investigation team (now Operation Fernbridge) as evidence in the Elm Guest House paedophile scandal (1979-1982) allege that the then Chief Secretary to the Treasury, later Home Secretary,and current Trade advisor to this Coalition Government, Leon Brittan was a regular visitor to the guest house where the abuse of young boys trafficked in from local care homes took place.

As such Leon Brittan is implicated in the Operation Fernbridge paedophile investigation.
Leon Brittan left British politics suddenly in 1989 to become a European Commissioner after receiving a Knighthood.. He became Baron Brittan of Spennithorne in 2000.


As Home Secretary, with oversight of the police and the judiciary, he took a slow, ‘step by step’ approach to requests that the then legal organisation, The Paedophile Information Exchange (PIE), should be outlawed. He was presented with lists of known perpetrators and members of PIE. It is unclear at this stage what action, if any, he took.  source http://theneedleblog.wordpress.com/2013/01/27/naming-the-living-part-1/


In 1984 Geoffrey Dickens MP handed over a 50-page dossier detailing VIP child abuse  to Leon Brittan then Home Secretary and nothing happened except the dossier dissapeared.


Although most people have now forgotten the event, two and a half years ago David Cameron – unable to find anyone who’d take the job as Trade Minister – appointed Leon Brittan as a consultant to do the job ‘full time for £500 a day’ – or roughly £170,000 per annum. The former Thatcher aide worked in the role from September 2010 until February 2011, taking time off from his Vice-Chairmanship of UBS investment bank to do it. 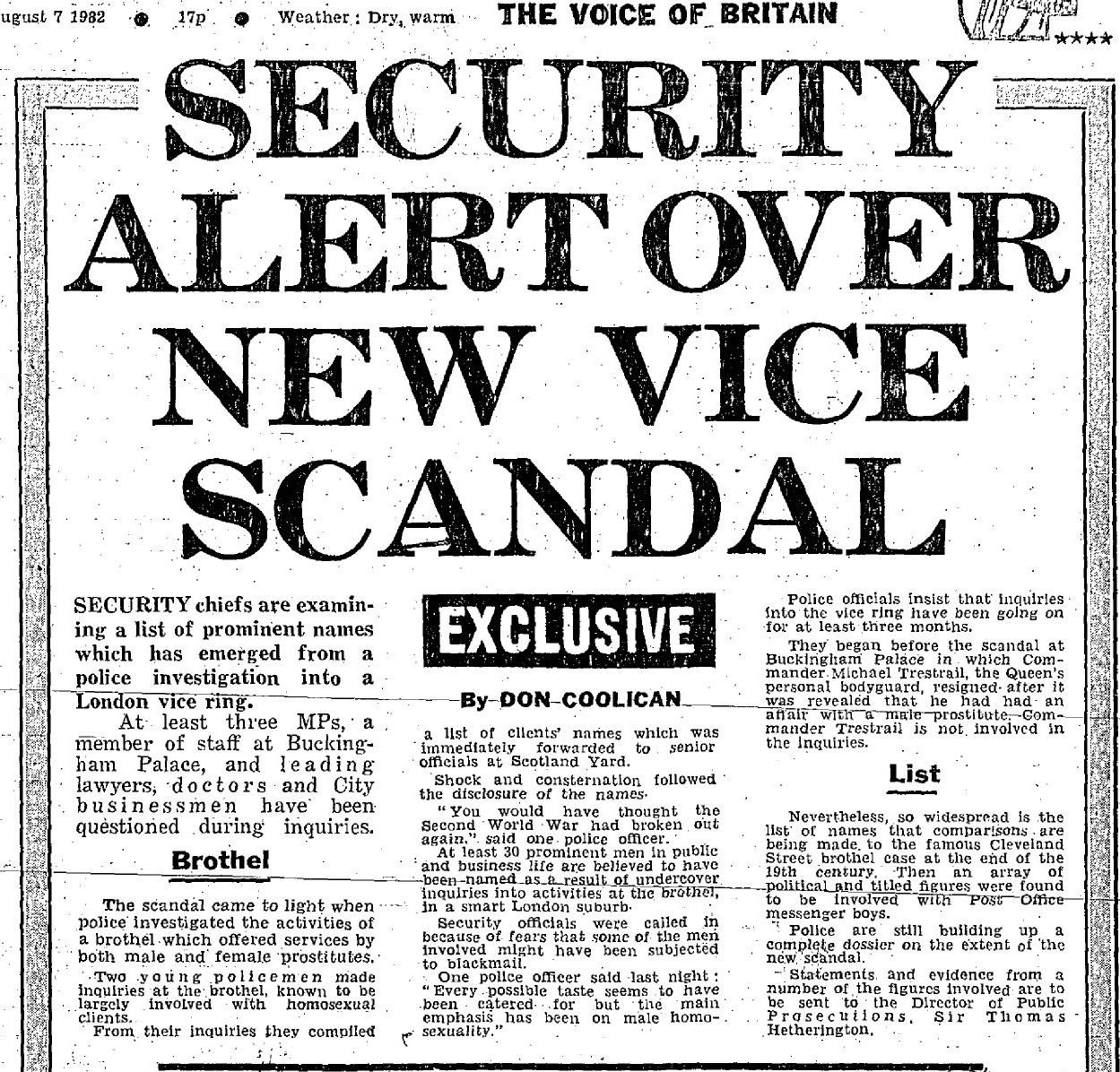 This is not, however, the only direct link Mr Brittan has with the Coalition. He was also Deputy Prime Minister Nick Clegg’s first political boss in Europe, and on LBC recently David Mellor mentioned that Brittan had promoted Clegg: “He [Clegg] got the job because Clegg’s father was a very close friend of Leon Brittan” said the former toe-sucking Conservative Minister. It is not clear whether Clegg promoted Brittan’s cause for the 2010-11 consultancy job, but the LibDem leader admits himself that Mr Brittan first introduced him to Paddy Ashdown.

Brittan first became a controversial figure during the Westland Helicopters affair in 1986. He resigned when he was shown to have leaked a letter critical of the minister at the centre of the scandal, Michael Heseltine. Heseltine stormed out of Cabinet, but was later said by some to have felt ‘framed’ by events during and after the events of that time. Sources told The Slog late last year that Heseltine’s appearance in the ‘little black book’ of American paedophile pimp Jeffrey Epstein was “a plant designed to discredit him”, but to my knowledge nobody has ever accused specific individuals of the frame-up. (The Daily Mail rang Heseltine at the time, who told them he had “no memory of even meeting Epstein”.)  read more
http://hat4uk.wordpress.com/2013/01/27/elm-house-paedophiles-cyril-smith-named-but-coalition-in-fear-of-evidence-closer-to-home-about-rocks-lane-parties/
Posted by Act Now at 07:15