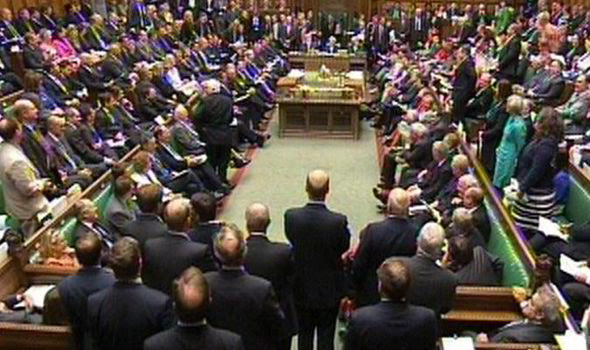 INSIDIOUS: Parliament is ‘encircled by paedophile rings’ influencing our society [PA]
To recap: ­Labour Party members Harriet Harman, her husband Jack Dromey and their  colleague Patricia Hewitt have been at  the centre of a media frenzy for their alleged links to the Paedophile Information Exchange, which campaigned to legalise sex with children in the Seventies.

Naturally, I found their reported connections to PIE disturbing when I first happened upon this information, which is why I wrote about it in the Sunday Express last May.

The reason I did, and why I will now return to the subject, is simple.

In October 2012, MP Tom Watson stood up in the Commons and addressed the Prime Minister. He told David Cameron that he had become aware of rumours of paedophile rings which “encircled parliament” and had done so for decades and he then asked for this to be investigated.

Since Mr Watson’s pronouncement, we have witnessed the arrest of a Catholic priest, two unnamed workers associated with a children’s care home and a sorry display of Seventies light entertainers and present-day soap stars who have been ­paraded before the public and the courts to answer varying charges of abuse from paedophilia to groping.

Most of the charges have been dismissed due to lack of evidence that comes when reporting historic abuse. There have been scant convictions save for the former TV presenter Stuart Hall.

However what we have failed to see, and they have been glaring by omission, are any arrests pertaining to parliamentary paedophiles.

For this reason I have been perturbed by the recent focus on Ms Harman et al by the media, including the BBC, which continues to insist that this issue is about one newpaper’s battle with the Labour Party.

It was no more acceptable to support “paedophile rights” in the Seventies than it is now, even though apologists keep ­suggesting it was part of the “liberated landscape”.

The truth is, there is a bigger issue within the Establishment. Over the past 17 months I have interviewed many survivors of child abuse.

I have heard stories of satanic ritual abuse, a significant factor in many paedophile rings, at the hands of household-name parliamentarians past and present

I have recorded ­testimonies from a number of adults who have implicated former MPs, from all parties, as their abusers.

I have heard stories of satanic ritual abuse, a significant factor in many paedophile rings, at the hands of household-name parliamentarians past and present.

I have listened to claims of acts so obscene, so grotesque, borne out by the physical as well as mental scars many of these survivors carry, that to hear them relay their experience has left an indelible image in my mind and no attempt to erase the details has been successful.

One problem of a Parliament dogged with paedophiles and their sympathisers is that those MPs my interviewees have named are attempting to foist their warped ideology on our society.

In their roles as representatives of our nation, they continue to align themselves with focus groups and ­individuals who want to significantly lower the age of sex­ual consent, just as Ms Harman apparently did decades ago with the National Council of Civil Liberties and PIE.

I know about these supporters because I have publicly taken to task a number of them over the past year or so in print and on TV and radio.

They include academics and lawyers and they have forcefully joined the call to legalise child sex.

Far from “protecting children who wish to explore”, as these apologists claim, it would make youngsters more vulnerable to the advances of predatory paedophiles who wish to satiate their desires while ­escaping scot-free because if it is legal to have sex with a child, then there will be no abuse case to answer to, will there?

The truth is, paedophilia is not a political issue but a moral one. It has no affiliations based on gender, background, cultural inheritance, wealth and religious or political persuasions.

It permeates every area of our society and not just the preserve of stereotypical dirty old men in raincoats.
Consequently, it is one thing to highlight MPs who have apparently previously backed dubious “anti-childhood” campaigns but it is far from an even spread of the true reality.

We now know that MI5 ­actively covered up MP Cyril Smith’s abuse of children and it appears far from an isolated case.

I recently interviewed Andrea Davison, a former intelligence officer now on the run in South America following her whistleblowing on the arms-to-Iraq scandal of Tony Blair’s Cabinet.

Ms Davison was adamant that paedophiles are a staple of parliamentary life and have been for some decades. She claimed that MPs have been filmed abusing children and this footage is used to blackmail ­parliamentarians into acquiescing on ­issues of global importance.

If this is true, we must ask just how ­ingrained in political life is a paedophile agenda?

Despite reporting to the relevant child abuse investigations all the MPs who have been named to me, I’ve heard nothing more and neither have there been any arrests.

While I appreciate that it would be equally wrong to name names without the due process of the law, I believe we must show a willingness to tackle this most ­heinous of subjects, and a decent starting point would be for those accused to be questioned.

For now, abuse survivors are left asking why we are concentrating on the mis­demeanours of Harman, Dromey and Hewitt without properly tackling those in the corridors of power who have been ­implicated in the abuse of children.

For those who support the rights of ­children, this appears to be nothing more than a smokescreen to protect the guilty.

The question is: who is protecting our children?
Posted by Act Now at 09:30