The police watchdog for England and Wales has found failings in the recording of sex crime allegations at the vast majority of forces it has so far inspected this year.  They are only able to inspect the cases of  rape reported  to the police through other agencies.  The figures represent the tip of a very nasty iceberg  which shows the police are institutionally dysfunctional and  for the safety of the public  should be immediately investigated  by independant bodies.  Many inquiries have been convened where critiscm of cetain Police forces is in integral part of the problem.  What this report shows is that the police are operating as a self servicng body mascarading under a banner of Justice in order   to serve their own hidden agenda .  This has to be rooted out 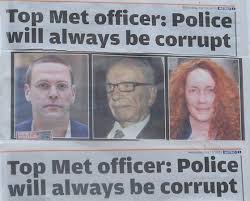 Audits of 21 forces’ crime recording practices by Her Majesty’s Inspectorate of Constabulary (HMIC) found that 17 failed to correctly record reports of sexual offences - including assaults on children and vulnerable adults.
Reports on specific forces published yesterday, following an interim report released by HMIC in May, identified a pattern of behaviour in which officers delay recording of sexual offence claims and in some cases fail to record them as crimes at all. This means the complaints are never properly investigated.
The audits, conducted between February and August 2014, found that:
*Just 61% of sexual offence incidents that should have done been recorded as crimes by the Metropolitan Police were classified as such and “clear lines of enquiry” about alleged rapes were not actively pursued;
*Where rapes were recorded as crimes and then re-classified as “no-crimes”, this was done incorrectly in at least a fifth of cases at West Yorkshire, North Wales and Greater Manchester Police. 41% of Cleveland Police’s rape no-criming decisions were wrong;
*Police in South Yorkshire, who are currently under fire over failure to tackle child sexual exploitation in Rotherham, were still spending a “great deal of time” trying to disprove victims’ accounts rather than investigate their complaints. Officers attending rape victims were required to provide a “lengthy handover package” – not required for any other crime type – before a crime is recorded;
A spokeswoman for Rape Crisis England & Wales said the HMIC findings were “of grave concern”.
“Even more worrying is the fact that this is by no means the first such finding,” she added. “How many more such reports will it take before we see a real and marked improvement in criminal justice for survivors of rape and other forms of sexual violence?”
The next set of so-called “force-specific” reports from HMIC is expected later this autumn and will be followed by a final national inspection report containing recommendations.

Last year’s parliamentary inquiry into police crime recording highlighted failures in regard to rape and sexual offences and led to police crime statistics being stripped of their status as official statistics.
Serving Metropolitan Police Constable James Patrick told the Public Administration Select Committee last November that his analysis of rape allegations recorded as “crime related incidents”and “no-crimes” by the force in 2013 had found that many of these reports should have been recorded as crimes.
The HMIC audit of the Met published yesterday, found rape recording had improved.
But the Met’s approach to other sexual offences left considerable room for improvement, the report found.
Of 106 sexual offences noted on “incident systems” that should have then been recorded as crimes, only 65 were.
And evidence of supervisory oversight was only present in 88 of the 164 sexual offence incidents reviewed.

The new HMIC reports add weight to findings from the Bureau and claims from PC Patrick that large numbers of allegations that should have been recorded as crimes may never make it to force crime-recording systems.
Crucially, this means they are not counted in “no-crime” statistics which are used to indicate the extent to which sex crime complaints are not recorded.
Allegations first have to be recorded as crimes before they can be re-classified as “no-crimes”.
The new HMIC audits show that many sexual offence allegations remain classified as “incidents” and are never transferred to crime recording systems, and cannot therefore be classified as “no-crimes”.
Case study: Alleged rape attempt recorded as a civil matter
The HMIC reports also found many forces were failing to record sexual offence allegations at the earliest opportunity as required by crime recording rules.
Under Home Office counting rules police officers are required to record crimes as soon as they are satisfied that it is likely ‘on the balance of probability’  that an offence occurred, and within a maximum of 72 hours from first logging the incident.
Bureau research published in January found several forces that record sex crimes only after investigation, with the victim’s initial allegation – however credible – viewed as insufficient to justify a crime report.
This prompted a letter from Home Office ministers to all forces advising them to record rapes at the time the complaint is made.
But HMIC’s inspections, which began shortly after the letter was sent out, found many forces are still “investigating to record”.

One Inquiry was into Police Spys. The Police claim to have disbanded the

keep saying. These same people and same organisation which used the

identities of dead babies to father children with environmentalists, smear the

Lawrence family and jail environmental activists are now operating under the


They've rebranded and continued with the same dirty tricks.

Police delay charging 200 pedphiles because they fear the public and the media they say.

http://www.exaronews.com/articles/5348/scotland-yard-delays-200-charges-over-claims-of-child-sex-abuse  So  they spend millions  setting-up activists and whistle-blowers but they can't bring themselves to  charge pedophiles.

The Child sex scandals where UK  Police at best did nothing to help the child victims are revealed weekly   http://www.mirror.co.uk/news/uk-news/rotherham-child-sex-scandal-resulted-4137542


At least 100  babies born to  abused children in Rotherham. Abuser threatened  to kill one  pregnant child if she did not have an abortion. Next baby he said he would allow her to keep it if she became a Muslim. What did the police do?  NOTHING
http://www.mirror.co.uk/news/uk-news/rotherham-child-sex-scandal-resulted-4137542

The Telegraph: Home Secretary Orders Inquiry into Police corruption and a new law is proposed of Police Corruption. http://www.telegraph.co.uk/news/uknews/law-and-order/10680213/Theresa-May-orders-public-inquiry-after-police-spied-on-Lawrence-family.html (Doc 1)
Daily Mail: Simon Danczuk MP says that as long as the Chief Constable of Manchester stays Paedophiles and sex offenders would not be brought to justice  http://www.dailymail.co.uk/debate/article-2726975/MPs-ferocious-attack-serving-Chief-Constable-As-long-police-chief-stays-paedophiles-sex-abusers-away-writes-SIMON-DANCZUK-Labour-MP-Rochdale.html