Can it get  any worse!  Bulter-Sloss was chosen to head a massive cover-up of child abuse by the Elite. This woman lauded as eminent, respected and eulogized about is really just another tool of an evil justice system.  A system  designed to protect those guilty of horrific crimes against children and persecute victims and whistle-blowers.


It turns out the Havers  her brother who prevented the prosecution of Pedophiles MI6 Sir Peter Haymen was himself a paedophile. A key witness Anthony Gilberthorpe has come forward who not only knows the names of the Tory Grandees and MP's who abused children he supplied the children  for them. 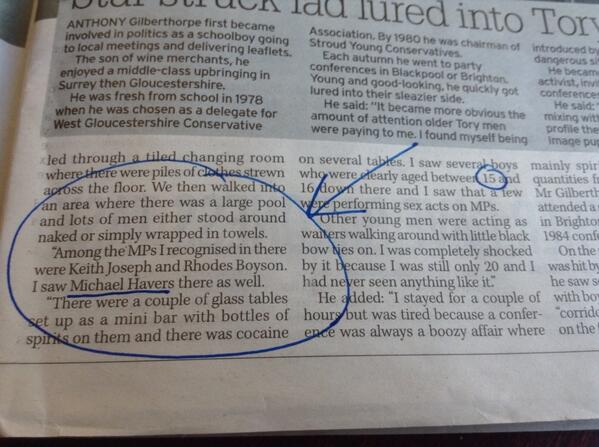 Tony Gilberthorpe former Tory Activist reveals that  Senior cabinet ministers in Margaret Thatcher's Conservative government were supplied with underage boys for sex parties where children were plied with cocaine and alcohol.
The former Tory activist says he was told to find the "youngest and prettiest" boys for several cabinet ministers as the "entertainment".
Those  present at the parties  he dare name becase they are dead included Sir Keith Joseph (Secretary of State for Education and Science), Rhodes Boyson (Minister of State for Northern Ireland), Dr Alistair Smith and Michael Havers.
We are asked to believe that David Cameron and Theresa May did not know about the compromising past of Bulter-Sloss brother, the former Conservative Attorney General.  Of course they bloody knew its why they chose their tool well.

Only something is not quite working out for these monsters who run Britain. ITV have published that

Former Prime Minister Margaret Thatcher knew about an alleged paedophile ring among the Conservative Party in the 1980s, according to the Sunday Mirror.
Ex-Tory activist Anthony Gilberthorpe told the newspaper he was asked to supply cabinet ministers with underage boys for illicit sex parties.
Mr Gilberthorpe claims he handed Thatcher, who died last year, the names of those involved 25 years ago but no action was taken.

NigelNelson
I arrived in Parliament as a political journalist in 1986 so I heard all the rumours.
I heard vile stories about paedophiles Sir Cyril Smith and Margaret Thatcher’s parliamentary aide Sir Peter Morrison, a man as creepy as poison ivy.
I heard sickening tales about other senior politicians, two of them former prime ministers.
So, you may ask, why didn’t I do more about it? These rumours were never backed by evidence, though we did look for it.
And in its absence they were dismissed as the malicious murmours of political enemies.
How wrong we were. And I’m scouring my memory now for all I’ve heard over the last 28 years which may warrant another look.
I’m rarely persuaded by conspiracy theories. Politicians are so cack-handed cock-ups are more likely.
But when it comes to historic sex abuse too many police investigations were dropped without good reason and too many documents disappeared.
That doesn’t necessarily mean a single, organised cover-up. There could have been lots of individual ones.
The prevailing culture of the 1980s was to protect institutions - whether Parliament, Buckingham Palace, the Church, Whitehall or the BBC.
That’s still the instinct of those in power, which is why David Cameron is desperately trying to keep control of whatever information his two inquiries may uncover.
But I do detect a changing attitude which may end lying as the default setting.
The reputational damage done to institutions when cover-ups are exposed eclipses our horror at the original offence.
The Catholic church lost millions of devout worshippers, disgusted by its failure to acknowledge child sex abuse by priests. That hit where it hurts - in the collection plate.
America’s naive trust in political leaders never recovered from the Watergate scandal 40 years ago after the head of state turned out to be a crook.
I’m writing this in my Commons office which was once the naughty step for MPs.
Years ago whips brought misbehaving MPs here, sat them by the log fire, and gave them a stiff whisky and a stern talking to about their misdeeds.
That elegant stone fireplace is still here, unused and open mouthed. If only it would talk.

Children have been abused  by these evil, arrogant people for decades and they have used the Courts, the Police, MI5  and the CPS to cover-up their crimes.

Margaret Thatcher 'personally covered up' child abuse allegations against senior ministers.  Scotland yard insider  exposes evidence which goes to the  very heart of claims that there was an Establishment cover-up to protect politicians , judges and police officers involved in a sick ­paedophile network.
--------------------

"that the Kincora inquiry's terms of reference "were rewritten just before it began with a view to excluding investigations into visitors to the care home so it would only focus on social workers or the staff".

This network is still in place and still operating today it has to expurgated from the political, security and justice system along with all its adherents and cleaners

Time now to free the victims and whistle-blowers from the fear they live in of retribution by a group of Politicians, Judges, senior Police officers and civil servants who raped and tortured little children and have covered-up for each others for decades.