McAlpines artist Ovenden finally charged with being a Paedophile 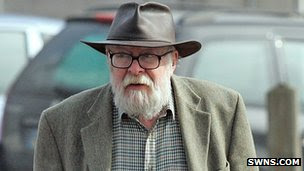 Graham Ovenden denies the charges
An internationally-acclaimed artist has been described in court as a paedophile who blindfolded girls and committed indecent acts.
Graham Ovenden, 70 - who has had work hung at the Tate Gallery - is accused of sexually abusing children in London and Cornwall.
Truro Crown Court heard Mr Ovenden's "target of abuse was young girls."
He denies nine charges of indecency with a child and indecent assault on victims aged between six and 14.
When he was arrested over the alleged abuse of one of the girls, Mr Ovenden admitted he had taken photographs of her - a few of them being "nudies", the court was told.
'Very major reputation' He denied that they were of a sexual nature, which she had alleged.
Prosecutor Ramsay Quaife told the court: "What we (the Crown Prosecution Service) say is that Mr Ovenden is a paedophile, and that he is a sexual abuser of children.
"In this case we say the target of his abuse was young girls. All four of the claimants are now adult women.
"Their allegations go back some years, but at the time they were all girls."
Mr Quaife told the court that during police interviews after his arrest in 2008, Mr Ovenden described himself as "a distinguished artist".
"He told police he still has a very major reputation as probably having entered some of the best portraits of children in the last 200 years," Mr Quaife said.
Posted by Act Now at 10:35