Today we find out that the cover-up of child abuse knows no end. Cameron is crowing banalities  that go something like this!   because  Mr Want less Wanless  found none of the missing documents it proves there is no cover-up. Is David Cameron MAD or does he think the Public are Morons?

No-one is ever to blame in their neat 'scratch my back' culture of nepotism and corruption and all at tax payers expense.

Why is Wanless Head of the NSPCC?   Is it the same reason Sir Cyril Smith ran
Kids homes and Sir Jimmy Savile had the run of hospitals  and Approved Schools?   Will Wanless now be knighted?

After joining the Civil Service, he held a variety of posts at theHM Treasury, including Head of Private Finance Policy, and Principal Private Secretary to three Cabinet Ministers.[5]including Michael Portillo, both when Portillo was Chief Secretary to the Treasury and later as Secretary of State for Employment.[6] 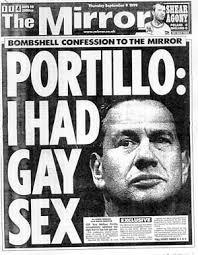 But Portillo was named  in letters  as part of the Child Abuse Ring
DEATH OF SCALLYWAG CO FOUNDER ANGUS JAMES WILSON AND MICHAEL PORTILLO
Angus James Wilson   the co-founder of Scallywag Magazine, together with his half brother Simon Regan.   Angus  later became the editor of Scallywags successor Spiked magazine  which  continued where Scallwag left off  pursuing  the paedophiles linked to the Tory Government.
That  Angus James Wilson died in Cyprus in a car crash in September 1996.    The following revealing  letter, written by Simon Regan assists  in the  investigation. This letter details  a meeting between Angus and Asil Nadir and the mysterious disappearance of compromising photographs of the then Minister of Defence  Michael Portillo (with under age boys).

Wanless was CEO of the Big Lottery Fund between February 2008 and May 2013,[2] when he was appointed as the Chief Executive Officer of the National Society for the Prevention of Cruelty to Children (NSPCC).[8] He is a non-executive director of The Kemnal Academies Trust (TKAT), which operates academy schools in South East England.
In July 2014, Home Secretary Theresa May announced that he would be leading a review into historical sex abuse claims.


John Mann MP talking on BBC radio about the Mysterious disappearing trick performed by the Home Secretary on the  Dickens Dossiers.  Listen Below

He also talked about the highly respected investigative journalist Don Hale who was given a copy by Barbara Castle  MP when she was a cabinet Minister.  These were stolen from him on threat of prison if he complained by Police Special Branch.

The Plot of this mystery is so ham so unbelievable if submitted as a script it would be cast out  by any publisher.   Simply no-one believes the Dickens Dossiers are Lost.  I mean no-one and this carefully orchestrated drama costing the long suffering tax payer even more of their hard earned cash is just that a drama.

We are asked to believe the unbelievable because the  Rt honourable this and the Sir this and the Sir that and a civil servant named Want less tells us so.  Can anyone explain why Wanless is head of the NSPCC after a undistinguished career as a cover-up merchant for Michael Portillo?

The People are being asked to believe these fantasy merchants because they are a QC this and MBE  that and  so we as serfs  must kowtow to our Lords and masters and hand them our kids to bugger, rape and murder. And we must stop complaining that we have to pay for all these pointless investigations designed to find no evidence against our Lords and Masters.

Then there are  the copies given to Andrea Davison last  one being stolen by two thieves in 2012. Evidence points to this copy being in the hands of  Andrew West  Manchester Crown Prosecution Service.


We all know that MI5 have the files, lets have a bit of transparency.  We know exactly where the files and evidence of CSA is located.
Posted by Act Now at 08:10