Is there a "magic circle" outside Scotland?

The "magic circle" was a group of legal figures in Scotland whose actions were highly questionable.  They participated and engaged in Both Child abuse and the cover-up, Without them the systematic abuse of children would not have continued.

Was there a "magic circle" in the legal profession in England and Wales? 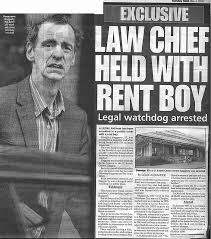 There is powerful evidence that the following legal figures were participant in "improper conduct with children":


Greville Janner QC  a Barrister  and former Member of Parliament


Further there are allegations that senior figures in the legal establishment were at the least participant in covering up paedophilia:


The allegations regarding the member of the judiciary are currently being assessed at Assistant Chief Constable level in the relevant Police force.

What is common is that the worst offender achieve the highest acclamation of Queens Council. Do they  achieve this because they are  a member of the 'Magic Circle'

Was there a "magic circle" outside Scotland?

I don't know but I know of nothing that leads me to exclude the possibility.
Posted by Act Now at 13:03