Top Tory arrested for historical rape no comment from Cameron

Tory top dog Alan Lewis, on his way to the Tory Party Conferance, was  arrested for raping girl in the 60's.

Lets hope this is the first of many Tory's arrested  for crimes against children and young people.  But more likely this is one Top Dog  who was not involved in the the systematic abuse of children in children's homes. 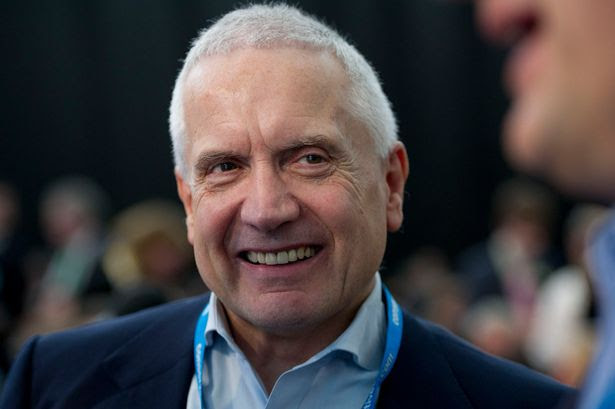 The 75 years old , was held by police  for the rape of a girl student.

The self-made tycoon, who owns the Crombie clothing chain and is thought to have a fortune of between £220 and £260 million, was reportedly arrested at a Manchester hotel while on a business trip.

A Tory source said: “We are in a state of shock over this.

"It could not have come at a worse time. Alan’s arrest will become the talking point of next week’s conference.”
Another party insider added: “At the moment only a few senior Tories are aware of Alan Lewis’s arrest. But once word gets out it will be a bombshell.
“Alan is a hugely popular figure with the senior ranks of the party, and his close relationship with David Cameron is well known.
“He plays a crucial role in keeping the obvious links between the Conservatives and their friends in the business world.”


Police asked  Lewis to attend a station in Belgravia, Central London  where he  was arrested on ­suspicion of raping a student in a Manchester hotel while on a business trip. She lived in the city at the time of the alleged attack.

The married woman, from Dorset and now in her 60s, came forward with her shock allegation a few weeks ago.

A party source said: “Questions are sure to be asked as to why the police have decided to arrest Alan Lewis only 48 hours before the start of conference. News of the arrest was bound to become the talk of the conference.”     Obviously he thought the police were under the COnservative party control  no Mr Tory they are under paedophile organised crime controle.

Greater Manchester Police confirmed: “A 75-year-old man has been arrested after a complaint of an historic rape in the Manchester area in the late 60s.

"The man remains in custody for questioning and inquiries are ongoing.”

Mr Lewis, who has donated nearly £500,000 to the Tories since 2006, was due attend meetings with business leaders and MPs at the conference.

The multi-millionaire, who grew up in Manchester and now has homes in London and Florida, was a successful ­entrepreneur at the time of the alleged rape.
He made his fortune turning around ailing textile firms.
He has been a central Tory figure since the 80s and went on to become chairman of the ­Confederation of British Industry from 1988 to 1990.
Mr Lewis, awarded a CBE in 1990, displayed his close ties to the party during the 1987 election as Margaret Thatcher regained power.
In 2010, the Mr Cameron made him vice chairman with responsibility for ­business. Mr Lewis claims to read the Bible every day.

He once said: “You have to conduct business in an honest and Christian-like way.”

At last year’s Tory conference he was involved in selling packages for up to £1,250 to bosses of oil and payday loan firms that allowed them to spend time with Mr Cameron and other Tories.

Lewis of course was honoured  when In 1990, he was made a CBE for his services as chairman of the Confederation of British Industry's initiative to prepare British businesses to the single market.

A Tory supporter since the early 1980s, he is a black belt in karate and a promoter of Christian healing who claims to read the Bible every day.
Posted by Act Now at 05:58