Greenpeace worried about the detention of their activist Alex

Greenpeace is asking for your help to support detained activist Alex  who is in the hands of the Russians.

It’s been 100 hours since we heard from Alex. A colleague and a friend, is one of 30 people being held prisoner aboard the Arctic Sunrise. Alex was one of the three activists who locked themselves in the communications room to get the message out, right before armed forces broke in and cut our contact with the ship. 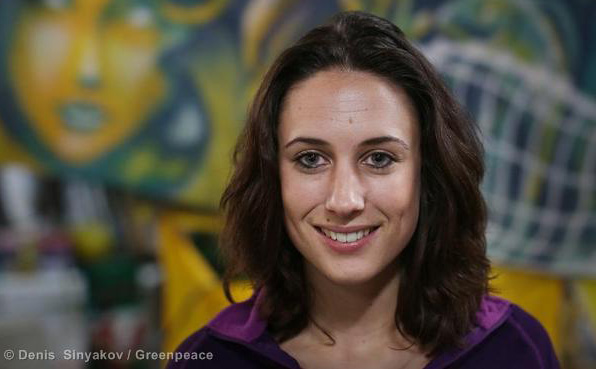 Russian media have reported that the Arctic Sunrise will be towed into the port of Murmansk on Tuesday. The activists have not been formally charged with anything yet. Let's use these last few critical hours to pressure the Russian authorities to release Alex and the 29 others.
Please send an urgent email to the Russian embassy to release our activists. More than 300,000 have been sent already, and every message counts.
www.greenpeace.org/freeouractivists
Seizing our ship in international waters is illegal. And the detention of peaceful protestors without charge is wrong. But it’s not too late for the Russian authorities to set them free.
Instead of protecting Arctic oil drillers, governments around the world should be protecting us from the threat that companies like Gazprom and Shell pose to us all.
Alex risked her liberty for all of us, now it’s time for us to stand up for her and help free the Arctic 30.
Ian and the friends and family at Greenpeace
Posted by Act Now at 14:38