Stuart Syvret who has spent years exopsing corruption in Jersey has been jailed again. Jailed by a State machine which will go to any lengths to cover-up State child abuse.

In February 2008, a States of Jersey Police investigation into historic child abuse began to be widely reported in the news media around the world.  In May 2008, Stuart Syvret made a formal complaint to the police claiming that senior civil servants had perverted the course of justice by covering up abuse of children in care homes. 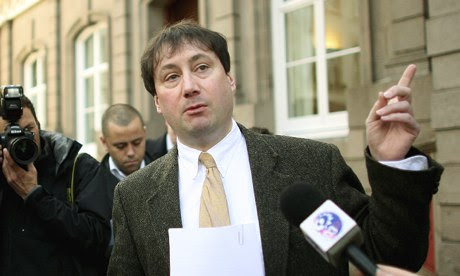 Jersey's former health minister Stuart Syvret, who has been sentenced to three months in prison. Photograph: Graeme Robertson
Jersey's former health minister has been sentenced to three months in prison after refusing to take down articles on his blog making serious allegations against a number of people on the island.
Stuart Syvret, described by one judge as "a thorn in the side of the [Jersey] establishment", did not attend the court hearing in the royal court in St Helier on Monday but was arrested at his home after locking himself in his flat.
According to John Hemming, a Liberal Democrat MP, Syvret has been unfairly prosecuted for revealing information in the public interest, including evidence that a nurse on the island may have killed some of his patients.
Hemming accuses the Jersey judiciary of behaving oppressively by misusing the Data Protection Act in order to silence its critics.
For a number of years Syvret has written a blog which publicises and examines what he sees as injustice and malpractice in Jersey. As a judge put it a number of years ago, the blog "frequently contains extremely grave allegations against people living in the island, some public figures some not. Many of the allegations, if not capable of justification, are highly defamatory."
From 1990 until 2010, Syvret was an elected politician in Jersey and from 2005 until 2007 served as health minister.
In April 2010 he was disqualified from membership of the States of Jersey - the island's parliament - ostensibly due to his absence from the island. For a period prior to his disqualification he was living in Hemming's flat in London as he launched and fought a number of legal actions, rallying against what he refers to as the "corrupt nature of Jersey's judiciary".
In parliament in 2009, Hemming used parliamentary privilege to reveal that Syvret had made murder allegations about a nurse on his blog. Hemming told the Commons: "He [Syvret] was then prosecuted under the Data Protection Act by Jersey. He was not allowed to adduce as evidence the case to which he referred on his web log, which is a public interest defence that he needed to reveal the failures of the judicial system in Jersey."
On 17 November, 2010 Syvret was convicted of two offences under the Data Protection (Jersey) Law 2005, one of disclosing personal data without consent, and the other of processing personal data without being registered as a data controller.
After losing an appeal against conviction and refusing to take down his blog he was eventually jailed for contempt for three months at the end of 2011. In 2012 Hemming raised Syvret's case again in parliament to make public the fact Syvret had been served with a superinjunction by the court ordering him again to take down the offending posts from his blog.
Hemming told MPs that a number of individuals "have, with the assistance of the Jersey government, obtained a superinjunction against ex-senator Stuart Syvret – under the Data Protection Act of all things – to prevent from him saying things about them on his blog … ."
None of the four individuals named has ever attempted to sue Syvret for defamation. Instead, the data protection commissioner in Jersey, Emma Martins, has prosecuted him under the Data Protection Act.
She argues, highly unusually, that Syvret is the "data controller" of his blog (a position usually held in a large corporation) and that he has no right to name and shame people on his blog, whether or not the information he reveals about them is correct.
Hemming said on Monday: "This use of the Data Protection Act to silence people in Jersey is oppressive.
The Guardian spoke to Syvret on Friday after he learned of his sentence. He claimed to have locked himself in his flat and said: "I am about to become a political prisoner in Jersey – again, for whistleblowing, for being a dissident."
Posted by Act Now at 23:56