Russia  is detaining 30 GREENPEACE activists on suspicion of piracy.  This is clearly a concocted charge and is totally unnecessary because the whole world knows what Greepeace does  and they publicise exactly what they do.

The criminal activity I am blamed for is called journalism. I will keep doing it.” - Denis Sinyakov, freelance photographer aboard the Arctic Sunrise when it was seized 8 days ago.
Hi there,
I was shocked to see pictures of Denis behind bars in the Russian courtroom on Thursday. I'm a freelance photographer too and I was about to replace him when the ship reached the next port. But now Denis is being held in jail for another 2 months, without charge.
Yesterday, a further eight Arctic activists appeared before a court in Murmansk, Russia. No charges were laid, but now all 30 are being detained for two months as Russian authorities pursue an investigation around piracy charges. Today, Greenpeace lawyers have launched an appeal against these detentions.
The Russian authorities are punishing those who have risked their liberty to highlight the madness of Arctic oil, while protecting the fossil fuel industry. It should be the other way around.
Join me in central London or at a venue near you, on October 5, as part of worldwide event to free the Arctic 30. Sign up to get an SMS or email with more details about events at various locations around the country.
I am relieved to see people all around the world speaking out in support my friends. Russian newspapers are blanking out images on their webpages to draw attention to it. Together we’ve sent over 660,000 messages to Russian embassies worldwide. We’ve made global headlines. Now we need to show our determination on the street.
On Friday, I went to the Russian embassy in London with my young son (pictured). I met his mother onboard the Arctic Sunrise four years ago. We all visited the ship again just a few months back. Some of the crew are like part of our family now: people like Haussy (the ship's electrician from New Zealand), 'Big John' (outboard mechanic from Tonga), and Paul (first mate from Canada). It's upsetting to think I was saying goodbye to them on the quayside in Norway only last month. Now they are facing up to two months in a Russian jail without charge. 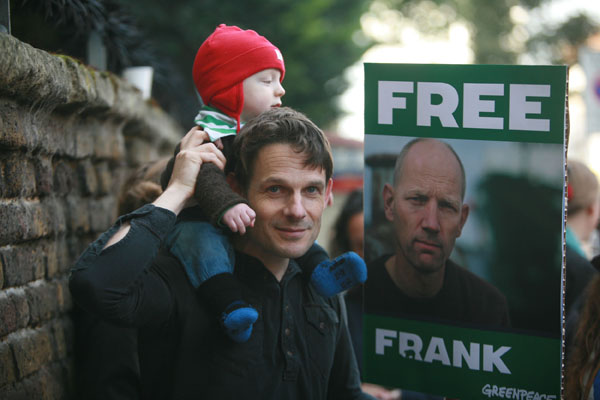