You’d better believe that Max Clifford has a lot of skeletons in his filing cabinet. If you have enough money, you too can have your skeletons filed away in these rather seedy archives. In the leaked video that has since gone viral, allegedly filmed before last year, the camera man managed to loosen up Clifford enough to spill a large can of beans. In the video, the legendary PR Guru to the stars and elites let slip that he had successfully hid away the sins of one Tory MP, and ‘diarist’, Alan Clark.

Tory MP Alan Clark
Alan Clark’s noted adulterous affair with Valerie Harkess, the wife of a South African judge, and her two daughters Josephine and Alison, for their tale of the seduction of all three by Clark (to whom he referred collectively as “the coven”) made the Harkesses ‘a lot of money’ according to Clifford.  The affair became public knowledge in 1992 after Clark left the House of Commons, and later took its place between the covers of a few best selling seedy novels. Both sides had profited from the affair, but according the Clifford in the video below, it seemed that MP Alan Clark had to bury a rather inconvenient detail which would have landed him in a criminal court. Here are two excerpts from the video which was released by super blog site Guido Fawkes: “He enjoyed it that whole thing, Alan Clark loved the whole thing…  they(the Harkesses) made a lot of money out of it, he used them, so they wanted to make money out of it, and had a … so they did, he(Alan Clark) enjoyed it and sold a lot of books.” “The only slightly serious side of it was that he(Alan Clark) actually interfered with those girls from the age of 14…” He seems to be referring to the crime of paedophilia there… If this was indeed the case, then Clark would have also profited from it. Fancy that. Watch the video here: The next line is the real killer though, and one which we should all stop, pause, and consider properly – particularly during the current paedophile upheaval which the BBC and the current government are so anxious to draw a line under. Following the fake duel between the BBC’s Newsnight and much maligned Lord McAlpine, the establishment was hoping that no more high-ranking figures or MP’s would be fingered for paedophilia or child abuse. This much is certain – the elite power brokers want their public nightmare to end with Savile.  Casually referring to the volumes of dirt he has tucked away for a rainy day, Max Clifford ignominiously boasts here: “I’ve got all the evidence, I’m the one who’s hidden it from the world, I know where everything is…” If this video is genuine and what it appears to be, then Clifford could eventually become a key figure at the centre of this issue. The Independenthad published a story on this incident entitled, Publicist Max Clifford Denies Covering Up Conservative MP Alan Clark’s Underage Sex Scandal, but then quickly removed it from their website. This is not surprising because Max still wields incredible power on Fleet Street. The full text of their article can be found here, explaining:


“The former government minister Alan Clark had sex with children, according to the publicity agent Max Clifford. In a secretly filmed, three-minute interview posted on the internet last night, the publicist said that the Tory MP and diarist had “interfered” with two 14-year-old girls. But he added, during a discussion of his success in suppressing scandals, that the story had never come out. Last night Mr Clifford, who was unaware his comments were being recorded, strenuously denied that he had told the girls’ family to stay quiet about the allegations.” 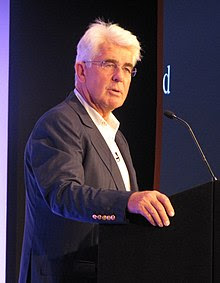 Max: Keeps ugly secrets safe.
Max Clifford keeps things tidy for the elite, and the dirt he collects keeps him safe from reprisals. It’s a high stakes game, and he is undoubtedly one of the best ever to play it. He knows where the bodies are buried, so to speak. Sure, it would be career suicide for his PR business, but if he chose to, he could certainly help towards gaining justice for many sexually abused children. In the end, that’s up to Max Clifford, but because of the nature of his work and the confidentiality which is the currency of his profession – any disclosure on crimes in high places is unlikely to happen. One might ask here, where does Clifford stand morally, or legally for that matter, if he is holding back information about known paedophiles, particularly those in government? Does he have the same sort of protection from disclosure as say, a doctor, or Catholic priest? He has not committing any offense as such, but it’s worth asking here, does he have a duty to report a child abuse case? Critics might charge here, and rightly so, that Clifford is somehow putting his own wealth above the safety of children. If it’s a paedophile in government, then it could be viewed as a national security issue because that public official could be blackmailed by a foreign interest. It would be interesting to know if Sir Jimmy Savile was a past client of Clifford’s, or of another firm. An intriguing question now is: how many more MPs, celebrities and various oligarchs (these are the only people who can afford to retain the services of a high flyer like Max Clifford) have had their sins washed away by Clifford, or other PR firms like his? Since the Savile scandal broke, guess who have been getting flooded with phone calls from ‘frightened’ celebrities who are afraid of being implicated, for unknown offensesrecent article describes the phenomenon:


Dozens of big name stars from the 1960s and 70s have contacted Max Clifford “frightened to death” they will become implicated in the widening Jimmy Savile child abuse scandal, the PR guru has claimed. He said the stars, some of whom are still big names today, were worried because at their peak they had lived a hedonistic lifestyle where young girls threw themselves at them but they “never asked for anybody’s birth certificate”.

Most celebrities and TV people will use the ‘rock n roll’ get out clause, claiming that children were “throwing themselves at me”, and this tends to work in Britain where morals are now subject to the laws of relativity. But after Savile, the rock star excuse doesn’t hold as much credence. They are all genuinely scared, feeling guilty, because they know they got away with it back them because the system covered for them, but that system is crumbling – that’s why they’re calling Max – to preserve their media value. More girth for Max Clifford’s expanding filing cabinet? More girth in fees too. This couldn’t come at a worse time, as Max Clifford has recently been appointed as the PR Ambassador to the BBC charity, Children In Need. Is a man who makes his living running cover for the rich and powerful the right man to steer a children’s charity? You cannot ignore the spooky echoes of old Esther Rantzen and pal Jimmy Savile and their Child Line panto. Without a doubt, there is a lot to speculate on – is this yet another example where the activities of paedophiles in high places strangely link with these “children’s charities” in Britain? This comment below is from the forum at Mumsnet:

Above text states: “Paul Roffey (child protection expert) said that pop stars used their position to manipulate young women to carry out acts which were as illegal then as they are now. Clifford also says he has also been contacted by women claiming ‘all kinds of things’, some of whom want to make money out of the abuse scandal. He actually says that he doubts that 50% of what they have told him is true! And Yet he believes his famous friends who come to him because they are worried about associations with JS and child abuse. He defends clients such as OJ Simpson, Mohamed Al Fayed, David Copperfield, Kerry Katona, Simon Cowell, Shilpa Shetty, the five men who were suspected of killing Stephen Lawrence, Gillian McKeith and Shrien Dewani, the man accused of orchestrating the murder of his wife, Anni in S Africa. I rest my case. MC is, in fact, the perfect, living embodiment of contemporary hypocrisy. God Help us!!” You can try and spin it all you want, but an older folks having sex with a child is morally, and legally wrong. Let’s be honest with ourselves on this issue - paedophillia seems to be acceptable with certain privileged people in power. Therein lies the BIG problem we are facing as a society  by Nicholas Myra 21st Century Wire Nov 13, 2012
Posted by Act Now at 16:38