70 year old widow threatened with £2,500 fine for smoking a cigarette 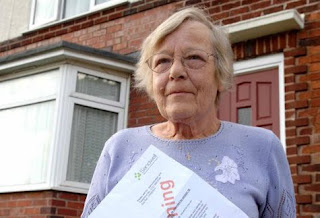 Sheila Martin, a 70 year old widow living in Oldbury, has been warned that she could be prosecuted and face a fine of £2,500, plus costs, for smoking a cigarette at a bus stop.

During the course of enjoying here cigarette, she was approached by an official from Sandwell Council, who issued her with a £75 fine for 'littering', due to some ash falling from Mrs Martin's cigarette end.

She said: "I still can't believe what happened. I was just sat at a bus stop quietly enjoying my cigarette and from nowhere a warden appeared and accused me of littering. I couldn't believe it, I was only smoking a cigarette. It is one of the few things I have left that I can afford to buy myself. I can't work out why the council would be so vindictive over such a petty matter. I'm so upset and angry."

Mrs Martin refused to pay the £75 fine, and has now the elderly widow has been issued with a 'Final Warning' from Sandwell Councils Prosecution Team, threatening her with prosecution, and a fine of up to £2,500.

Mrs Martin has vowed to fight on, and has stated that she would rather go to prison than pay this ridiculous charge.

Last year, an official from Sandwell Council issued a mother with a £75 fine, for feeding ducks with her son in a park.
Posted by Act Now at 18:34