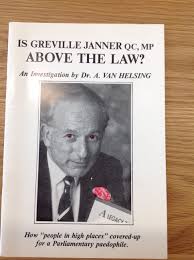 A Lord a QC, a Member of Parliament  a very rich and powerful man  and a serial pedophile protected all his life by a corrupt Prosecution Service  a corrupt Police Force and a corrupt State.

UK Parliament to hold debate on why Serial pedophile Janner is not to be prosecuted!


Business Questions 18th June 2015
transcript Hansard
Simon Danczuk (Rochdale) (Lab): (On Director of Public Prosecutions and Lord Janner)
The whole House will be aware of the recent decision by the Director of Public Prosecutions not to prosecute Lord Janner for alleged child abuse owing to his apparent ill health. May we have a debate on this decision, and will the Leader of the House offer any advice on why Lord Janner can retain his seat in the other place, writing laws, when he is apparently unable to face the law himself?
Chris Grayling:
This immensely sensitive issue is part of a much broader sensitive issue. I commend the hon. Gentleman for his work in this regard; he has done as much as anyone to bring this matter of great national concern to the fore. There has been a lot of debate and controversy about the decision that has been taken, and there will be an Adjournment debate next week in which Members will have the chance to raise concerns and issues about the Crown Prosecution Service. I am sure that the messages from that debate will be listened to very carefully.
Mr David Burrowes (Enfield, Southgate) (Con): (on ease children in care go missing)
May we have a debate about looked-after children going missing from care? A concerning report from the London Assembly this week highlighted the fact that in Enfield 199 children have gone missing from care in the past five years, 109 of them for more than 24 hours. That puts those vulnerable children at risk of abuse, exploitation and radicalisation.
Chris Grayling:
My hon. Friend makes an important point, which links very much to the one made a moment ago by the hon. Member for Kingston upon Hull North (Diana Johnson). The disappearance of children from care can lead to all kinds of adverse consequences. I have talked to some of the victims of the sex abuse gangs, and one of the most striking things was the way in which in many parts of this country young people were able to walk into and out of care easily, without proper monitoring and without supervision. That simply should not happen, and every local authority has a duty of care to young people to ensure that they are not wandering the streets at night and cannot be preyed upon by gangs.
Diana Johnson (Kingston upon Hull North) (Lab): ( On latest FOI reported sexual offences against children by police)
The NSPCC’s very disturbing report this week showed that there were an additional 8,500 recorded sexual offences against children to April 2014, yet prosecutions are actually falling. Following that, may we please have a debate in Government time to find out what is happening in this very important area?
Chris Grayling:


This is an enormously important issue. I suspect that a significant part of the increase is because—in an entirely welcome way—more victims feel able to come forward to report crimes that would otherwise go unnoticed and unreported. That is good. It is of course of enormous importance that all authorities involved do everything they can to bring to justice the perpetrators of those crimes. Justice questions is on Tuesday next week, and I hope that the hon. Lady will raise the matter directly with my colleague the Secretary of State.
Posted by Act Now at 08:19