Detectives in Operation Fairbank  have seized a video which proves  a former Conservative cabinet minister was at one of several parties where boys were sexually abused by men.  The ex minister has confirmed he was at the party. He did not have a choice really as he was captured on the video. The video, along with several photographs, allegedly places the ex-MP, a household name, at a depraved orgy organised by a paedophile
In February The Sunday Mirror reported how the minister had been photographed by police in 1986 entering a property where one of the sex parties was being held, but no arrests were made.
Cooke, now 86, would pick up the unsuspecting teenage boys from streets around Kings Cross. He would drive them to places across North London where paedophiles lay in wait to rape them repeatedly.
A former officer, who worked on Operation Orchid which convicted Cooke and his gang, claimed they had taken pictures of the minister and that 16 members of an alleged VIP paedophile ring were due to be arrested.
But the day before the arrests were to be carried out, detectives were told the operation had been disbanded.
The unit is focusing on a series of parties in London three decades ago at which boys were supplied for sexual gratification of men.  Among the notorious paedophiles who went to the parties was Sir Jimmy Savile MBE and Sir  Cyril Smith MP.
One victim has been identified from the photographs The  victim claims he was ­trafficked, along with other children, to Holland by Cooke’s gang.


The party is believed to have been organized by the notorious Paedophile  Sidney Cooke  who was jailed in 1984 as the head of a gang who gang raped and Murdered the child Jason Swift.
The Metropolitan Police Service’s paedophile unit seized the footage under ‘Operation Fairbank’ which is scoping historical claims against politicians of child sex abuse. It is investigating additional allegations against politicians and other prominent people under ‘Operation Fernbridge’. The photographs were seized from a known child sex offender earlier this year and the video came from  another source. The source has managed to keep evidence safe until it is safe to reveal it.

Scotland Yard’s paedophile unit has been working with Dutch police, and an officer from Amsterdam attended an interview by Met detectives with the key witness.
"this is potentially bombshell stuff"  said a source close to the Met

Its becoming increasingly difficult for the criminal organization within the Police, the Government and State Agencies  and the BBC to prevent this bombshell from exploding as more and more people will not shut up.   Police officers like Lenny Harper continue to fight to expose the truth about the rape and murder of children by this elite group who inhabit the corridors of power,  sit ensconced in the Association of Chief Police Officers and pontificate in Britain's Courts.  Listen to  Lenny Harper on Peoples TV   http://voiceforchildren.blogspot.com.ar/2013/11/lenny-harper-on-peoples-voice.html

For decades this organization has dominated every aspect of the criminal justice system allowing paedophils to escape justice and jailing victims and whistle blowers who refuse to be silenced.

In the 80's Geoffrey Dickens MP gave  his now famous child abuse and child sex trade  dossiers to the then Home Secretary Leon Brittan.  Brittan named as a visitor to the child sex party  House Elm Guest House and named by child victims in  the North Wales Scandal did nothing of course. 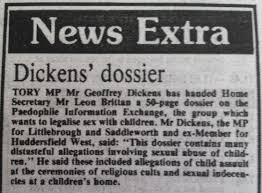 Theresa May the current Home Secretary is unable to find the dossiers and Dickens wife destroyed her copies out of fear. The only remaining pages were seized by the North Wales and Derby police  in January 2010 from child abuse whistle-blower Andrea Davison.

Tom Watson MP who has refused to be silenced asks "After 30 years without an answer it's time to find out who protected the infamous Paedophile Information Exchange"  He asks  current Home Secretary Theresa May to investigate her own department.   The Home Office can demand all the files from MI5 and the Police. Files.  These files list all the  abusers of children, with video's and  photographs, and give full details, with names, of everyone who has been  over decades and is now involved in the cover-up of the sexual abuse and murder of children and the child sex trade and child porn network.


And what about the proceeds of crime These elite paedophiles, in the  Police, judiciary, legal profession, social services, security services, civil service,  and Government  have been making fortunes from organised crime. They sell poor children into the lucrative paedophile network. Some children are murdered for snuff videos which sell for big money.  Some are used to blackmail prominent people.  They do all this using tax payers money and they persecute and or jail anyone who threatens their perverted business empire. Good cops, whistle-blowers and worst of all the child victims themselves.

Its time for the TRUTH