Earnest and Marguerite Cole lived exemplary lives. On retirement both took up voluntary work. Marguerite became ill and this very common occurrence led to a Court issuing an injunction preventing Ernest from visiting his sick wife.
The people behind this act of unmitigated cruelty run Sanctuary Care Limited.  Sanctuary Care conducted a campaign to ruin the final years of these decent honest ordinary folk.
Earnest and Marguerite Cole spent their lives as model citizens. During his working life Earnest worked for Securicor and when he retired he did wonderful voluntary work for the NHS as a hospital car driver. His wife Marguerite worked as an auxiliary nurse and in her retirement worked voluntarily for the WVS now the RWVS.
Life passed simply for Earnest Marguerite until Maguerite was diagnosed with colon cancer in 2007 and sent home to wait. It seems the medication she was given had a negative effect on her causing her pain and dizziness. Because of this social services suggested a nursing Home.
Enter SANCTUARY CARE LIMITED a group which provides care home facilities and housing management amongst other activities.
Initially Earnest was happy with Sanctuary Care  he volunteered to tidy the garden at the Sanctuary Home this meant he could spend more time with his beloved wife. Marguerite began to complain  about the food in the home so he would take her out for lunch and a push her along the sea front in her wheel
chair.

Then Earnest noticed something that worried him. He saw  the standard of care for his wife decline quickly and he found out there was a two tier system at the home.  Those with money had everything, good medical treatment, good nutrition and a high standard of care. But those who could not pay the high fees suffered from discrimination, poor medical care, neglect and bullying. The more time he spent at the home the more he noticed things he wasn't happy about.

Ernest raised concerns about the standard of care his wife and other residents were receiving in the home. That was when his troubles began. Sanctuary Care and their Staff were on a nice little earner and they were not going to let Ernest get in their way.  So they Banned Earnest from the Home. He would no-longer be able to see his wife.

Earnest Started  to campaign outside the Home  and gathered over 10,000 signatures from passers by.  The petition  ended up in drawer in the local MP Ben Bradshaw's  office who did nothing.
But Earnest was  causing trouble  for Sanctuary Care and so  they  concocted a plan.. Sanctuary Care Limited had friends in the brotherhood, they had judges in their pockets. They were confident the Court would made an order preventing any criticism of their Care Home. They were confident their two tier system of care could continue to enrich them at the expense of the old and vulnerable. They knew Earnest was vulnerable and they could get rid of him.
They made an application  to  the Court  and the Court granted an injunction preventing Earnest from seeing his beloved wife Marguerite ever again.  He was banned from the Home  and banned from entering the vicinity of the Home.  What could possess any reasonable person to make such an order. But Judge Tyzach and his ilk are not reasonable people they are the products of a totally corrupt Court system which serves big business both legitimate and criminal. 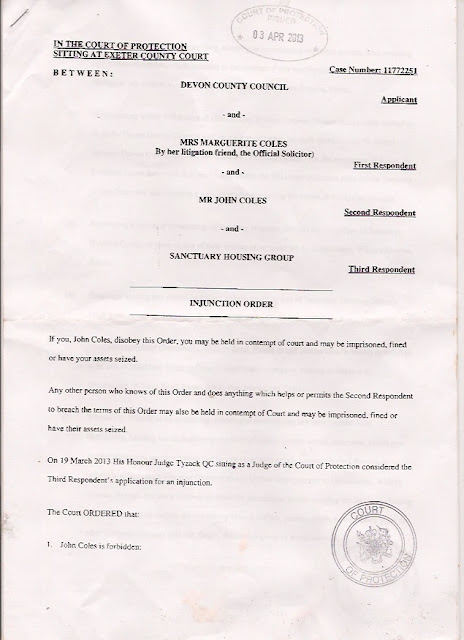 The Court Order not only prevented Ernest from visiting his wife it prevented him from even approaching the Care Home where she was now held prisoner.


We can only imagine the distress caused to Marguerite when her beloved husband stopped visiting. What did the staff say to her endless questions? Did they even listen? How long was it before Marguerite stopped asking for her husband, stopped asking if she could go home, how long before she drifted into despair ?

In 2011 Ernest,  assisted by friends was able to obtain legal representation. He received £50,000 legal aid. Sanctuary and  social services  claimed Ernest was a danger to Maggie and this was the reason they gave for banning him from seeing her until  she died or invited to do so by the local council.  But a different Judge in Birmingham  declared after conducting a full investigation by an independent social worker into the facts surrounding the case,  that it 'was' in Maggie's best interest to see her husband.

So a supervised visits was arranged  Supervised by the manageress  and the Dr from the home. Ernest was supported by a family member, but she strangely was  not allowed in the room where the meeting took place.  It is documented that the meeting went well and although by now Maggie was unable to talk she responded with her eyes when he mentioned her home town in Ireland that she loved so. It was a heart breaking meeting that ended in tears for both Ernest and Maggie he was then ushered out by the manageress.

On leaving the room Ernest said he fell against her. Whereupon  the manageress shouted "did you see that he hit me". The doctor wrote a statement to say that Ernest had “ nudged the manageress on the fore arm when leaving”  The result was that the  ban was reinstated and he didn't see Maggie again until invited to do so when she was “ expected” to pass away.

That  night the home invited him to see Maggie was at the end of November 2013 as she was expected to die that night. However she didn't die that night so Ernest went back to the home the next day to see her one more time. There was a confrontation in the reception of the home as he was refused entry. He sat outside the home on the wall and the police came and arrested him. He was taken to a prison in Cornwall for the night were he lay cold, lonely and heart broken.

He was bought back to court the next day and presented before the Judge Tyzack who had been the judge that kept the order going. He was in ther an hour and then released with out
charge. The judge said to him do not go near the home or you will end up in prison. Maggie passed away a few days later.

If it were not for the redoubtable Samantha Wakefield a volunteer advocate who took up Earnests case the story would never have come to light. Like so many stories about the elderly and the vulnerable it would have remained hidden from view under a mountain of greed, inhumanity and indifference.


Samantha met Ernest 4 years ago..He was sitting in his car with a sign on the bonnet saying “ PLEASE HELP ME ” Samantha says “ I had previously worked as a voluntary advocate for adults with learning difficulties and had just completed a degree in Television production. I quickly became immersed in researching his story and assisting him to communicate effectively by sorting him out with hearing aids and reading his 700 pages of paper work from the courts.”


“The front page of his documents said that anyone seen to help him brake the court order or report on his story whether it be online or on paper would be arrested fined and have their assets seized.” Samantha told us “ That court order has now run out as his wife has now passed away.”


The Court had put a reporting black out of the dying old lady and the Care Home who prevented her loving husband from ever seeing his wife again. Marguerite died alone in 2013, even on her death bed the Court order prevented Earnest from being with his wife. Unimaginable cruelty for the elderly married couple.


Since then Samantha has battled to get someone to listen and it is because of her perseverance that you are reading this story today.

So lets take a look at Sanctuary Group. Looking into the group we find the dubious Masonic connections which always hover beneath shadowy injustice involving the Courts and Police System. 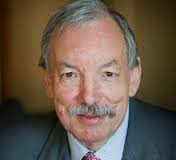 Association Limited and a member of the Committee of Management (as appointed by the corporate trustee) of Bateman Memorial Almshouses Charity and The Spon Lane Trust Almshouses.

This is the man behind the banning of Earnest Coles from Visiting his own wife.


Frightening stories about Sanctuary Group poor in from all quarters as the Group, like many truly corrupt organizations is above the law. They have the police and the courts in their pockets.


“Many people’s lives are being damaged by a registered charity that regularly makes over £20 million profit, that pays its Chief Executive over £280,000, and that pays no tax. It looks like Sanctuary has got too big and too greedy to function properly.!


“The uselessness, lies, rudeness, threats, bullying and generally corrupt behaviour of Sanctuary Housing Group (includes Sanctuary Housing Association, Sanctuary Care, Sanctuary Management Services and others) over the last few years are extensively documented in a large number of personal accounts from people across England and Scotland on my previous blog Are Sanctuary Housing above the law? “


The evil Sanctuary Group and the Courts in the guise of Judge Tyzach QC prevented an elderly man from seeing his own wife. Britain’s system is the antipathy of Human rights, the whole system seems designed to persecute the weak and the vulnerable. Today we learn that a Foreign Office chief has said Human rights are no longer a 'top priority' for the Government. Whilst David Cameron says his government are going to ignore European Human Rights.

From childhood to death Britain’s system needs an overhaul to bring compassion and respect back into a State system lacking in both. Now the very avenues designed to protect the weak and vulnerable assists in their exploitation. Children in children’s homes are systematically raped and exploited, the disabled have their benefits removed with too many being driven to suicide, then in old age the State assists groups like Sanctuary Care to strip the elderly of their assets. Poor children, the disabled and the elderly are victims of corruption and neglect in one of the worlds richest nations. It’s a scandal

The question remains, why are the main stream media not reporting on this? even though they are aware of the story.
Should there be a public inquiry into this leading care provider in England and are they fit for purpose ?

The latest is that the local council have recently acknowledged a formal complaint made by Ernest as he believes this whole thing was an attempt to keep him quiet about the wrong
doings he witnessed in the home.

After a year and a half of requesting Maggies care plan and medical notes from the home
and the doctor concerned, sections of them have been received. It took a lawyer and a private investigator to gain access to the notes.

They have now been read and they state that they have been
“re written”
A formal request has been sent to Sanctuary  Ltd for an explanation for this. Their deadline is the 19th of October 2015.

More on this story as it unfolds.

http://www.theguardian.com/law/2015/oct/03/un-criticises-british-government-bill-of-rights?CMP=Share_AndroidApp_Tweet
Posted by Act Now at 11:35