The Courage Foundation has opened an emergency fund for Trident whistleblower William McNeilly’s defence costs.
Able Seaman William McNeilly is a 25-year-old British Engineering Technician Weapons Engineer Submariner who has blown the whistle on major safety risks and cover-ups within the British Royal Navy’s Trident nuclear weapons programme, stating, “We are so close to a nuclear disaster it is shocking, and yet everybody is accepting the risk to the public.”
William McNeilly released a 16-page report to WikiLeaks, who published the original in full. The report draws on McNeilly’s experience in the Royal Navy to detail security lapses, safety hazards and a culture of secrecy and cover-up. In particular, McNeilly describes surprisingly weak security around the UK’s Trident nuclear submarine base, writing that “it’s harder to get into most nightclubs than it is to get into the [restricted] Green Area.”
McNeilly has turned himself in to police and is now being held in Royal Navy custody at an undisclosed location, where he faces potential prosecution. Whilst it is yet unclear what charges McNeilly will face, he is in military custody and the UK has a number of military charges that, like the Espionage Act in the United States, do not offer defendants the chance to make a public interest defence.
Regarding his reasons for acting as he has done, McNeilly explained the difficulty of achieving results through regular channels: “I’m releasing this information in this way because it’s the only way I can be sure it gets out. I raised my concerns about the safety and security of the weapon system through the chain of command on multiple occasions. My concern couldn’t have been any clearer.”
The Courage Foundation is taking McNeilly on as an emergency case, providing a defence fund immediately for the public to donate to, ensuring its possible for him to mount the best defence from the start.
Britain’s nuclear deterrent, which is based at Falsane in Scotland, has been the subject of increasing domestic controversy over recent months as the latest possible date for a political decision on its renewal draws near. The Scottish National Party, whose MPs won 56 of Scotland’s 59 parliamentary seats in the recent General Election, is strongly opposed to a Trident replacement being commissioned.
Among the most startling of McNeilly’s revelations include the fact that three missile launch tests failed, missile safety alarms were ignored, torpedo compartments were flooded and bags were not properly checked for security risks. He also claims that HMS Vanguard crashed into a French submarine in February 2009. McNeilly says there was a “massive cover up of the incident. For the first time the no personal electronic devices with a camera rule was enforced.” At the time, the Guardian reported that “the Ministry of Defence initially refused to confirm the incident” and that Vanguard suffered mere “scrapes”, but McNeilly says one officer told him, “We thought, this is it – we’re all going to die.” 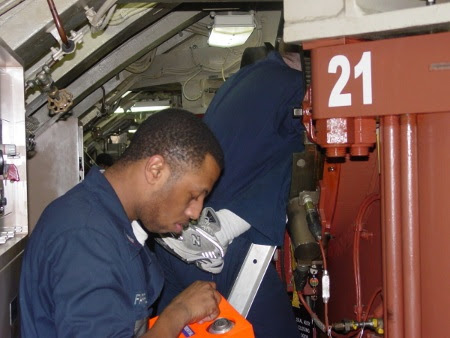 McNeilly mentions finding rubbish in the missile compartment, reporting this to superiors and no action being taken. One of the duties of a Missile Technician on a US submarine is to patrol the Missile Compartment looking for hazards like this. UK practice is likely to be the same, at least in theory.
McNeilly describes hearing of a fire in the missile compartment of a Trident submarine. While there is no other public evidence of this incident, the description of problems with a lack of adequate breathing apparatus is consistent with recorded accounts of fires on Royal Navy submarines. His claim that a very small fire can produce a lot of smoke on a submarine is confirmed by other sources.
He describes how it is possible to walk through security barriers without your pass being properly checked.  In October 1988 a protestor from Faslane Peace Camp was able to walk through several checkpoints, onto a Polaris submarine and then into the vessel’s Control Room (Herald report). In November 2000 a car-load of tourists accidentally drove into Faslane and was able to get through the checkpoint without any passes (source).
McNeilly quotes CB8890, the instructions for the safety and security of the Trident II D5 strategic weapon system. There is a reference to this manual in a defence safety review. The paragraphs from CB8890 which he quotes are similar to nuclear safety documents which have been released under the Freedom of Information Act.
The submariner’s report suggests that there are a high number of breaches of safety procedures on Trident submarines. This is consistent with an acknowledged rise in nuclear incidents. The number of nuclear safety incidents at Faslane and Coulport rose from 68 in 2012/13 to 105 in 2013/14 (source). Between 2008/09 and 2012/13 there were 316 nuclear safety events, 71 fires and 3,243 “near miss” incidents at Faslane and Coulport (source). There were 44 fires on Royal Navy nuclear submarines between 2009 and 2013 (source).