PAEDOPHILE PRIESTS PROTECTED BY THE POPE

All over the world we see that a criminal organisation composed of Police Officers, intelligence officers, the judiciary, politicians and the Catholic Priesthood  conspire to protect paedophiles and exploit children.

In the Elm Guest House VIP Paedophile Scandal a catholic priest was one of the first arrests to be made. read more http://www.mirror.co.uk/news/uk-news/elm-guest-house-cops-make-1647997 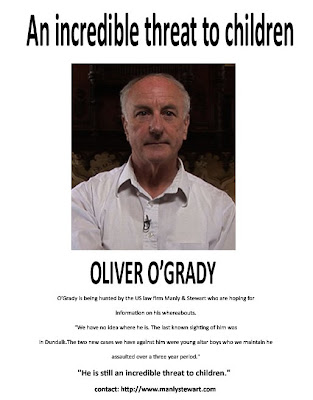 Anthony and Chrissie Foster are co-authors of Hell on the Way to Heaven write about paedophile priest and the Pope.


ON the 28th of February, Pope Benedict XVI will step down from his Roman throne mired in a shame that runs deep.

On clergy abuse, he has been an impotent Pope, who like his predecessors, fellow cardinals, bishops and priests, has done precious little to protect children, provide justice to victims, or banish criminals from the ranks of an organisation that places itself as a moral leader yet doesn't seem to recognise that raping a child is a crime.

As Pope Benedict, he has spent the past seven years obfuscating the clergy child sexual assault issue within the church, just as he did to us when we attempted to advise him as to how his church could better treat its child victims.

That was in Sydney at World Youth Day in July 2008. At that time our daughter Katie, a clergy abuse victim, had been receiving 24-hour care for the previous nine years after running in front of a car while binge drinking to forget her torment.

Emma, another of our daughters and also a victim, had committed suicide only six months earlier.
We could see the damage and feel the heartbreak of this most heinous crime upon children and wanted better treatment for those still living. He refused to meet us.

On Anthony's national interview aired the previous night, Bishop Anthony Fisher, WYD co-ordinator, having dined with Benedict and Cardinal George Pell, said at a press conference that we were "crankily dwelling on old wounds".

The death of one daughter and the permanent disability of our other daughter seemingly meant nothing to these men of the cloth.
Perhaps all bishops are heartless, and share the opinion of the bishop in the US who declared in open court "it was the church's position that minor children were accomplices in their own molestation".
Perhaps even Pope Benedict is heartless. For how else can we understand his lack of action?
A look at his history may provide the answer. Prior to his papacy, for 24 years, Joseph Ratzinger was head of the Congregation for the Doctrine of the Faith - the Vatican department that dealt with cases of clergy child sexual assault.

He oversaw a period where the abuse, molestation, assault and rape of children were rife within the Catholic clergy. In 2005, on becoming Pope, he achieved diplomatic immunity from a US lawsuit that alleged he had conspired to cover up abuse during the 1990s.
He had manifestly failed to provide for the protection of children, and actively allowed offenders to continue offending.

Human rights lawyer Geoffrey Robertson has suggested that his resignation could again expose him to lawsuits from victims of paedophile priests.

Can we expect any better from the next pope? Sadly, the answer is no. After 2000 years, the Roman Catholic Church seems uninterested in, and incapable of, eliminating the despicable scourge of clergy sexual abuse.

We can no longer wait for the Catholic Church to do what is right.
As evidenced by the Victorian Parliamentary inquiry and, soon, by the federal royal commission, the time has come for the actions of the church to be rigorously regulated and monitored by society's laws.
We must never again allow the church to trample on the rights of children.

We urgently need legislative changes that make the church accountable for its actions.
Past and future victims must be able to sue the church. Bishops must be responsible for their decisions to relocate offenders, and the church must not be able to hide behind old laws that protect it at the cost of thousands of children's lives.
Governments  must act where this Pope has failed.
Posted by Act Now at 05:42