The UK Conservative Government and their toady Police force  show they are drunk with power as more details emerge that the UK police were going to charge   David  Mirander with Terrorism!

Only the intervention of the Brazilian Government saved Mirander  from  being set-up on terrorist charges by the British Police  and the UK Government. He would undoubtedly have gone to jail as the CPS regularly jury rig political trials.


Now there is no doubt that the UK Police and   criminal justice system should be  overhauled before they become worse than the Stasi. 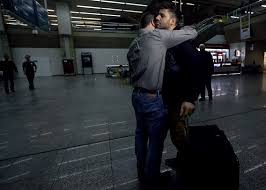 Greenwald spoke to Charlie Savage of The New York Times and provided more details, which confirm that authorities intercepted documents that would have formed the basis of future Guardian news stories.

“Mr. Miranda was in Berlin to deliver documents related to Mr. Greenwald’s investigation into government surveillance to Ms. Poitras, Mr. Greenwald said. Ms. Poitras, in turn, gave Mr. Miranda different documents to pass to Mr. Greenwald,” Savage reported. UK authorities told “Mr. Miranda that they would obtain permission from a judge to arrest him for 48 hours, but he was released at the end of the nine hours, around 1 p.m. Eastern time.”
Also, what Greenwald told Savage further confirms the critical role Brazilian government played in ensuring Miranda was not kept longer than the maximum period under the terrorism statute:

A lawyer for The Guardian in London was working on trying to understand what had happened, as were foreign-affairs officials for Brazil both in that country and in London, Mr. Greenwald said. He said that he received a call from the Brazilian foreign minister about 40 minutes after alerting the Brazilian government, and that the Brazilian authorities were outraged.


The partner of Guardian journalist Glenn Greenwald was detained by United Kingdom authorities at Heathrow Airport for nine hours, the maximum period under a provision of a terrorism law in the country. His partner had “electronics equipment including his mobile phone, laptop, camera, memory sticks, DVDs and games consoles” confiscated.

Greenwald has been reporting stories containing information on top secret surveillance programs. He obtained the information from former National Security Agency contractor and whistleblower Edward Snowden, who has successfully obtained a year of temporary asylum in Russia.
“David is smart and strong,” Greenwald told Firedoglake. “But still, it was scary: Guardian lawyers were speculating all day that given how much time he was held – which is very rare – he’d possibly be arrested under a terrorism statute.”

“It’s speculation, but I think the only reason that didn’t happen was because Brazilian government at high levels intervened so aggressively and angrily,” Greenwald added.
The story of his partner being held in detention has become the biggest story in Brazil, according to Greenwald.

The Guardian reported, “David Miranda, who lives with Glenn Greenwald, was returning from a trip to Berlin when he was stopped by officers at 8.05am and informed that he was to be questioned under schedule 7 of the Terrorism Act 2000. The controversial law, which applies only at airports, ports and border areas, allows officers to stop, search, question and detain individuals.”
Statistically, “most examinations under schedule 7 – over 97% – last under an hour, and only one in 2,000 people detained are kept for more than six hours.”

Miranda was visiting Laura Poitras, “the US filmmaker who has also been working on the Snowden files with Greenwald and the Guardian. The Guardian paid for Miranda’s flights.”
Since there is no way any official in government could defensibly argue Miranda had any connection to any terrorists or was involved in any terrorist activities, presumably, the authorities intended to use the terrorism law to intercept whatever files might have been loaded on to the electronic devices while he was in Berlin meeting with Poitras—a clear attack against journalists engaged in news gathering.
Greenwald published a post on the targeting of his partner, which provided some more details:

At the time the “security official” called me, David had been detained for 3 hours. The security official told me that they had the right to detain him for up to 9 hours in order to question him, at which point they could either arrest and charge him or ask a court to extend the question time. The official – who refused to give his name but would only identify himself by his number: 203654 – said David was not allowed to have a lawyer present, nor would they allow me to talk to him.
I immediately contacted the Guardian, which sent lawyers to the airport, as well various Brazilian officials I know. Within the hour, several senior Brazilian officials were engaged and expressing indignation over what was being done.

The authorities did not say if they would return any of the “electronics equipment.” Greenwald declared, “This was obviously designed to send a message of intimidation to those of us working journalistically on reporting on the NSA and its British counterpart, the GCHQ.”
The Brazilian government put out a statement:

Amnesty International’s Widney Brown, senior director of international law and policy, reacted, “It is utterly improbable that David Michael Miranda, a Brazilian national transiting through London, was detained at random, given the role his husband has played in revealing the truth about the unlawful nature of NSA surveillance.”
“David’s detention was unlawful and inexcusable. He was detained under a law that violates any principle of fairness and his detention shows how the law can be abused for petty vindictive reasons.” Brown added. “States cannot pass anti-terror acts and claim they are necessary to protect people from harm and then use them to retaliate against someone exercising his rights. By targeting Miranda and Greenwald, the government is also sending a message to other journalists that if they maintain their independence and report critically about governments, they too may be targeted.”

This act committed by the United Kingdom (and likely in service to the United States government) is similar to what the government of Iran has done in its targeting of journalists’ families. While the family member was held for a much longer period of time, this person, who is related to a BBC reporter, was “arbitrarily detained and held as a hostage for close to two weeks” in 2012.

It was part of a”wave of arrests against journalists and bloggers prior to parliamentary elections” and led the Middle East director at Human Rights watch, Sarah Leah Whitson, to state, “Detaining a BBC reporter’s relative seems to be part of a wider campaign to harass Iranian journalists by putting pressure on them and their families. It suggests that authorities detained the relative to silence the reporter and the BBC. It also sends a message that the government’s long arm of repression can extend well beyond borders.”

For nine hours, Miranda was the United Kingdom’s hostage. The authorities had a window to extract whatever they could from him by imposing their power and telling him any number of things while they tried to question him. The hostage-taking was all to send a message to other journalists that this could happen to them if they report on information from whistleblowers, who dare to reveal how the national security apparatuses of countries are committing abuses and crimes by violating the rights and privacy of citizens.
Jacob Appelbaum, Tor software developer and former WikiLeaks volunteer who knows from being targeted by the Department of Homeland Security what Miranda possibly went through, declared, “Detainment under the veil of terrorism while traveling is awful. It is especially awful when the goal is indirect political intimidation.”

“These kinds of detainments are political thuggery. The detained person’s property is stolen without recourse and they are denied a lawyer,” he also stated.
The Guardian noted, “Schedule 7 of the Terrorism Act has been widely criticized for giving police broad powers under the guise of anti-terror legislation to stop and search individuals without prior authoriation or reasonable suspicion – setting it apart from other police powers.”
It should go without saying—If you are a government official claiming the surveillance programs being exposed, which show close cooperation between US and UK intelligence agencies, are lawful and nothing to worry about, the last thing one should dare to do is target the relative of the person who is working aggressively on behalf of a source to continue to call attention to government surveillance.
The last thing a government should probably do is target a relative of someone, who major news television programs will give a platform to respond to this clear and obvious attack on press freedom.
And, if a terrorism law with controversial powers is valued, the last thing a government should do is abuse it by going after the relative of a prominent journalist. That could jeopardize the law’s existence by sparking a controversy that would lead political leaders to respond by pushing for reform or complete repeal.

It might also convince people, who were skeptical of what Greenwald has been saying about government abusing national security or surveillance state powers, that Greenwald is, in fact, correct. (Case in point: Andrew Sullivan of The Dish’s reaction.)
Nonetheless, the UK authorities held Miranda hostage under a terrorism law. The UK government (and to the extent that it was involved, the US government) deserve every bit of outrage and scrutiny that comes as part of the fallout from this significant attack on not only a journalist’s partner but freedom of press in general.

source and curtesy of  Firedog  http://dissenter.firedoglake.com/2013/08/18/greenwald-brazils-intervention-kept-partner-from-being-charged-under-uk-terrorism-law/
Posted by Act Now at 05:52