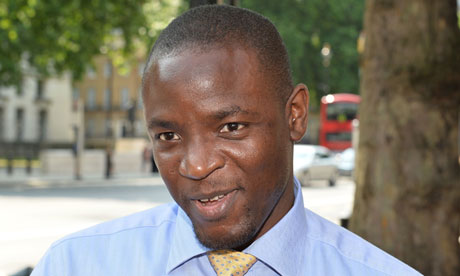 Duwayne Brooks, who witnessed the murder of his friend Stephen Lawrence in south-east London in 1993. Photograph: John Stillwell/PA
Police chiefs have admitted they bugged Duwayne Brooks, the main witness to the murder of Stephen Lawrence, it has emerged.
A senior Scotland Yard officer gave the authorisation to covertly record at least one meeting attended by Brooks and his solicitor.
The admission was made as Nick Clegg, the deputy prime minister, supported calls for a rigorous investigation into what Brooks's lawyer called the police's "horrific and appalling" treatment of him over the past two decades.
Brooks believes that more of his meetings were bugged by the police.
The bugging claims emerged last week after the whistleblower Peter Francis alleged that police spied on Brooks and the Lawrence family in an attempt to discredit the campaign for justice for Stephen Lawrence.
The bugging happened after an inquiry, led by Sir William Macpherson, had ruled that police had treated Brooks in a racist way, even though he had been traumatised by the experience of witnessing the murder of his best friend in an unprovoked stabbing in south-east London in 1993.
The Met claimed that it would reform its ways in response to the damning report in 1999. The landmark findings also forced the Met to launch a new investigation to find the killers.
In 1999 and 2000, the investigation team asked to meet Brooks and his solicitor, Jane Deighton, to update them on progress.
But at least one of these meetings, in May 2000, was secretly recorded by police who did not inform either Brooks or Deighton.
Last week, the Met started an investigation, headed by the deputy assistant commissioner Fiona Taylor. She has now told Deighton that she has found internal documents signed by a senior officer authorising the bugging of one meeting.
Deighton said Brooks "believes there is more. He very much wants to see the documents. There is every reason why they should be disclosed now so that he can see for himself exactly what has gone on."
The government has promised an investigation into claims by Francis, a former undercover officer, that he was asked to gather intelligence that could be used to "smear" the campaign for a proper investigation into the murder.
Francis revealed to the Guardian how he was instructed to find evidence to incriminate Brooks.
He and another undercover officer trawled through hours of footage of an anti-racist demonstration in May 1993 to locate Brooks. Five months after the demonstration, police charged Brooks – then traumatised by the Lawrence murder – with criminal damage, but a judge later threw out the case on the grounds that the delay in bringing the prosecution was an abuse of the legal process.
Brooks met Clegg to press for "the quickest, most transparent and thorough investigation" into both Francis's and the bugging claims. Deighton said: "This is the least the government can do to enable Duwayne to continue to rebuild his life after the racist attack on himself and the murder of Stephen Lawrence."
She said Brooks had been subjected to "appalling and horrific police actions over the last 20 years".
Clegg said he would raise the issue with home secretary, Theresa May. A spokesman for the deputy prime minister said he had "expressed his admiration for Duwayne's long-standing commitment to holding the police, and the government, to account over the events following the tragic murder of Stephen Lawrence".