How will Snowden get to Venezuela from Moscow

Venezuela is offering "humanitarian asylum" to U.S. National Security Agency leaker Edward Snowden, President Nicolás Maduro said Friday, suggesting his country could offer the leaker a way out of his apparent limbo in a Moscow airport but provided no details as to how it could happen.
Nicaraguan President Daniel Ortega also said his country would consider such a request by Mr. Snowden.
It wasn't clear how Mr. Snowden could make it to either country, however. There are no direct commercial flights from Moscow to Caracas. And a recent analysis of his possible routes to Ecuador, a country that last week extended an asylum offer to him providing he could get to Ecuadorean territory, showed that all of his connecting flight routes to that country ran through countries that have extradition treaties with the U.S. Nonetheless, Mr. Snowden could board a plane from Moscow to Havana, and then go on to Caracas. Although Cuba has an extradition treaty with the U.S., it has largely been a dead letter. 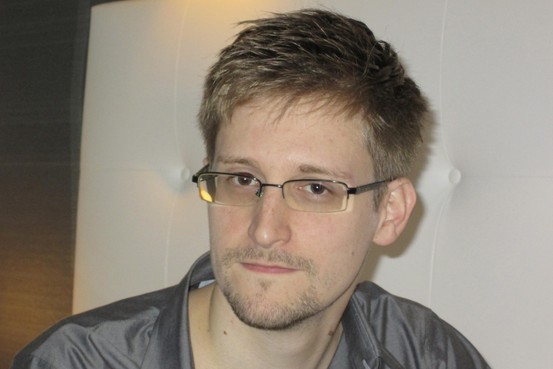 Reuters
It wasn't clear how Edward Snowden could make it to Venezuela or Nicaragua.
"Various Latin American governments have expressed their desire to take a position like that which I am about to express in this moment: As head of state of the government of the Bolivarian Republic of Venezuela, I have decided to offer humanitarian asylum to the American Edward Snowden," Mr. Maduro said during a ceremony celebrating Venezuela's independence day.
His comments come a day after the leftist leader, the heir of late socialist firebrand Hugo Chávez, said he intended to reject a U.S. extradition request for Mr. Snowden, which Venezuela's Foreign Ministry received earlier this week. 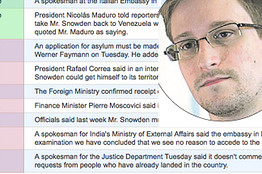 Associated Press
In public comments, Venezuela's Mr. Maduro has spoken of Mr. Snowden as a valiant rebel who deserves to be "protected by humanity" and has praised the former security analyst for unmasking U.S. espionage efforts at home and abroad.
A senior U.S. official said Mr. Maduro's invitation appeared at this point to be symbolic, because Mr. Snowden's fate, he said, still largely depends on the Russian government and whether Russia would be willing to transport him to Venezuela. "It's not clear as a practical matter that will have any effect, because Snowden would still have to get to Venezuelan territory," he said.
A White House official declined to comment, other than to say: "You'd have to ask the Venezuelans what it means, as it is their offer." U.S. officials have for weeks been appealing to counterparts around the world not to offer a place for Mr. Snowden to relocate and to return him to the U.S.
Mr. Maduro's offer of asylum was probably a reaction to events earlier this week when four European countries closed their airspace to the presidential jet of Bolivia's President Evo Morales because they suspected Mr. Snowden was a passenger on the jet. Mr. Morales was forced to stop in Vienna before finally being able to clear a route back home hours later. The incident infuriated many Latin American leaders.
On Friday, Spain's foreign minister defended the closure of European airspace, saying that Spain and other European countries were told that Mr. Snowden was aboard the presidential jet as it returned to South America from Moscow.
"What happened in Europe ratcheted things up and Maduro just found it irresistible to take it another step further," said Michael Shifter, the president of the Washington-based Inter-American Dialogue. "The understanding was that the U.S. was behind that. It touched a nerve and it was seen as such an insult that it required a very strong response."
Mr. Shifter said that regardless of whether Mr. Snowden ends up in Caracas or not, Mr. Maduro's offer of asylum will probably doom efforts by both governments to improve relations. In May, Secretary of State John Kerry met with Venezuela's foreign minister and both promised to work for better relations. On Friday, Venezuela's independence day, Mr. Kerry sent a warm message of congratulations to the Venezuelan government. "This will kill any chance of continued rapprochement between the two governments," Mr. Shifter said.
Heightened tensions with the U.S. could complicate Mr. Maduro's efforts to grapple with the country's growing economic crisis. Since coming to power, Mr. Maduro has been trying to deal with a sky-high inflation rate that analysts expect to hit 40% this year, a currency whose value on the parallel market is plunging and widespread shortages of consumer products. Mr. Maduro is facing increased criticism, while analysts say he has yet to consolidate his hold on power and faces challenges from powerful rivals within the Chavista movement.
A number of heads of state from around the Latin American region lashed out at Mr. Morales's airplane incident calling it "imperialist aggression" and accused European countries of kowtowing to U.S. government pressure.
Mr. Maduro said that he was offering refuge to Mr. Snowden to protect him "from the persecution that has been unleashed on him from the most powerful empire in the world." He added that all Mr. Snowden had done "was tell the truth" and said that the U.S. government was the guilty party for spying on countries around the world.
"Who's the violator here? A young guy that files a complaint about war plans or the U.S. government, which drops bombs and arms the terrorist opposition of Syria against the people and legitimate President Bashar al-Assad?" Mr. Maduro asked.
Concerning Nicaragua's Mr. Ortega, analysts were largely skeptical of his offer, made in a speech before thousands of supporters. "It is an ambiguous statement, that is consistent with his rhetoric of provoking the U.S. and in practice doing everything to maintain good relations," said Carlos Fernando Chamorro, a journalist and political analyst. Mr. Chamorro also said it was unlikely that Mr. Ortega would try to defy the U.S. at a moment when it is trying to win Washington's confidence in a project to build an interoceanic canal through Nicaragua with the help of a Chinese businessman.
A former top Nicaraguan official who knows Mr. Ortega well agreed with Mr. Chamorro's assessment. "It's his way of telling the Americans, I was asked to do this, but I'm not going to do it," the former official said. "I know him, it is a way that he can show off his revolutionary credentials, but he won't do anything in the end."
Earlier Friday, WikiLeaks said on its Twitter feed that Mr. Snowden had applied for asylum to six new countries, which WikiLeaks declined to name.
And Iceland's Interior Ministry said it had received a letter concerning Mr. Snowden's "situation" but that it was "not possible to confirm whether the letter in question is in fact from Mr. Snowden." The ministry added that "the letter cannot be regarded as an application for asylum under Icelandic law, since applicants must be in the country in order for their applications to be accepted as valid and given formal consideration." For those reasons, Iceland has "declined to process" the application, a ministry spokeswoman said.
Mr. Snowden is wanted by the U.S. after admitting to leaking details of the government's secret surveillance program. Russian officials have said he is currently in the transit zone of Moscow's Sheremetyevo International Airport.
Posted by Act Now at 10:31