YET ANOTHER BBC BROADCASTER ACCUSED OF PAEDOPHILIA

VETERAN BBC  television and radio broadcaster Stuart Hall was charged by police with the rape of a 22-year-old in 1976  and 14 counts of indecent assault  against girls as young as 9 years old.

The indecent assault offences are alleged to have been committed between 1967 and 1986 and to involve 10  girls aged between nine and 16 years old.

Stuart  Hall was awarded the OBE in the New Year Honours list of 2012.  Sir Jimmy Savile, Sir Peter Morrison, Stuart Hall OBE etc why are all these paedophiles honoured?

A police spokesman said he was bailed to appear before Preston magistrates court on February 7. 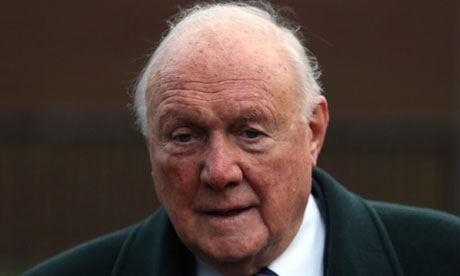 Stuart Hall has been accused of a number of sexual offences dating back to 1967. Photograph: Dave Thompson/PA
Stuart Hall, the veteran BBC broadcaster, has been charged with rape and 14 counts of indecent assault in relation to alleged offences over the course of three decades, Lancashire Police said last night.
The force said that he was arrested on Tuesday morning after attending a police station by appointment and has been bailed to appear in court in Preston on 7 February.
The indecent assault offences are alleged to have been committed between 1967 and 1986 and to involve 10 girls aged between 9 and 16. The rape is alleged to have been committed in 1976 against a 22-year-old woman.
One of the BBC's longest-serving commentators, he made his name nationally as a presenter of It's a Knockout in the 1970s and 1980s, and its European equivalent Jeux sans Frontières. Hall, who received an OBE in the last New Year honours list, has also worked on a number of programmes from his base in the north-west, including Look North.
Posted by Act Now at 03:20