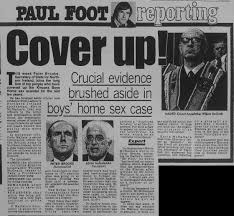 Although I initially offered to give evidence to the Inquiry, I later decided not to mainly on the grounds that the Government repeatedly refused to give it the same legal powers as the corresponding Inquiry in London. I believe that both the perception and the reality of the Government’s decision is one of unfairness to the victims.
Despite my decision, I did, however, provide the Inquiry with 265 pages of comment and supporting documents, drawing attention to false or misleading information contained in the transcripts of the public hearings. My reason for doing so was to enable the Inquiry to investigate and corroborate the accuracy of my past comments about Kincora and related matters, and to provide the Inquiry with the opportunity to correct the relevant errors in the its published transcripts.
None of the information I provided to the Inquiry is new. Although some of it has not previously been in the public domain, it has been in the possession of the Ministry of Defence and other Government agencies for many years and should have been made available by those authorities to the Inquiry. It should also have been made available by the authorities to previous Inquiries and the Government needs to explain why that did not happen.
Even more worrying, is the acknowledged fact that key Army Intelligence files relating to Tara and William McGrath appear to have gone missing after they were handed over by the Army to MI5 in 1989, prior to Prime Minister Margaret Thatcher’s admission to Parliament (30 January 1990) that Ministers had “inadvertently misled” Parliament about my case. There also appears to be no record whatsoever of what became of all the ‘Clockwork Orange’ project files which I handed over to my superiors when I left Army Headquarters in Lisburn in February 1975. Some of those files related to William McGrath. To make matters worse, it is now clear from the Inquiry’s transcripts that a senior MI5 officer, Ian Cameron, falsely accused me of ‘leaking’ information to the press about William McGrath. His claim was that I did so without authority.
The MI5 claim is bizarre because, as my Army superior at the time has confirmed in the press, I was officially instructed by my superiors in Psy Ops, at the behest of Major General Peter Leng, to brief the press about McGrath as early as 1973, in a bid to draw media attention to his activities. I have no doubts whatsoever that because General Leng wanted the press to investigate McGrath, he had very good reasons for doing so and deserves credit for what he did.
It is also significant that MI5 officer who accused me of ‘leaking’ information about McGrath to the press later refused to be interviewed by the Terry Inquiry investigators about why he ordered Army Intelligence officer, Captain Brian Gemmell, to stop investigating William McGrath. Clearly, the Army and MI5 had very different agendas regarding McGrath and his activities.
The astonishing claim by the authorities, including the Intelligence Services, that they knew nothing about the allegations surrounding McGrath’s sexual activities until 1980 is a total travesty. As my documents clearly show, it is simply not credible that I knew more about McGrath and his activities than the combined Intelligence community did in 1973/74. One must conclude, therefore, that the Intelligence Services did not tell the Inquiry all they knew about McGrath during the 1970s. Indeed, most of the information I possessed about McGrath in 1973/74 came from within the Intelligence community and was quite substantial. Moreover, my 1973 press briefing document clearly contains more information about McGrath than the Intelligence Services have claimed to the Inquiry that they possessed at that time! Finally, to suggest that because I gave the press the exact postal address (including the street number of the property) and telephone number of the Kincora home, but did not actually include the name, ‘Kincora’, somehow invalidates my evidence, is an unacceptable attempt to avoid facing up to what I have been saying over the years. That information also shows that the claim made by the Intelligence Services to the Inquiry that they were not aware until 1980 of where McGrath worked is demonstrably false.
Overall, I believe the Inquiry has been a wasted opportunity to establish the full facts relating to this matter and I feel the victims have been let down yet again, as they were by previous Inquiries
Posted by Act Now at 10:24