Clearly from the evidence Ryder was making and probably selling pornography of the worst kind.  But that's OK according to the Courts in the UK  it is only  being a child abuse whistle blower that merits  a jail sentence.  The  CPS made sure  they charged Ryder with  the wrong charge so that his legal aid lawyers could easily get overturned.

The British people are being brutalised by the corrupt Police the CPS and the Courts.  Tell me why they charged Ryder  with an indictment he could so easily get overturned.? Also tell me when has making child pornography not been a serious crime?

What does Ryder Know that they want to keep quiet and how much compensation will he get for being wrongly jailed? 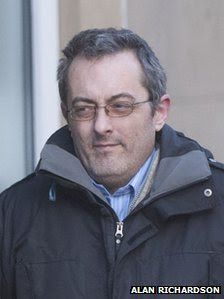 A man jailed over images of bestiality has his conviction overturned as "extreme pornography" legislation was not in force until after the offences.
Appeal judges heard the law used to prosecute Steven Ryder, 45, came in weeks after the time span of the charges against him.
Ryder has now been given a community payback order and will attend a sex offenders group.
This relates to a charge of possessing indecent images of children.
The judges also added a string of conditions to the payback order, including that he should not own or look after animals without the prior approval of his supervising officer.
Ryder earlier admitted making indecent photos of children and possessing extreme pornographic images of bestiality at a house in Ogilvie Street, in Dundee.
More than 4,000 indecent images of children were recovered from computer equipment along with video clips.
In addition, more than 2,000 images of sex with animals were found along with more than 500 pieces of footage.
Ryder admitted making the indecent photos of children between 11 June 2002 and 1 April 2011 and possessing the extreme pornography involving animals between 2 February 2000 and 19 March 2011.

Lord Drummond Young
But after the former student was jailed by Sheriff Richard Davidson at Dundee Sheriff Court last year an appeal was made.
Lord Drummond Young, who heard the appeal with Lady Paton and Lord Mackay, said that when the sheriff was preparing his report for the Court of Criminal Appeal in Edinburgh he became aware that the section of the legislation used to prosecute over the bestiality material only came into force on March 28 in 2011.
The judge said: "It was accordingly not in force during any part of the period specified in the charge.
"The sheriff states that he could not see any other basis on which viewing or possessing images of bestiality could constitute an offence prior to the commencement of that section.
"Consequently the appellant could neither be convicted nor sentenced for the commission of an offence which had not yet come into being."
The sheriff said that if he had been sentencing for the images of children alone he would have been unlikely to jail Ryder because most were at the least serious level.
Professional treatment Lord Drummond Young said it was clear, as the sheriff accepted, that the extreme pornography charge involving animals was not competent as the section of the Civic Government (Scotland) Act was not in force during the period covered by the charge.
"There was no other basis on which the viewing of the type of pornography covered by that section could be criminal," the judge said.
He said the resulting sentence imposed by the sheriff could not be competent and had to be reconsidered on the basis of the guilty plea over the indecent images of children charge alone.
Lord Drummond Young said: "We are of opinion that in this case the most important consideration is the appellant should receive professional treatment for his entrenched habit of viewing large amounts of internet pornography.
"This is clearly a very serious problem, but the reports that are available indicate that appropriate treatment is available."
Posted by Act Now at 15:16